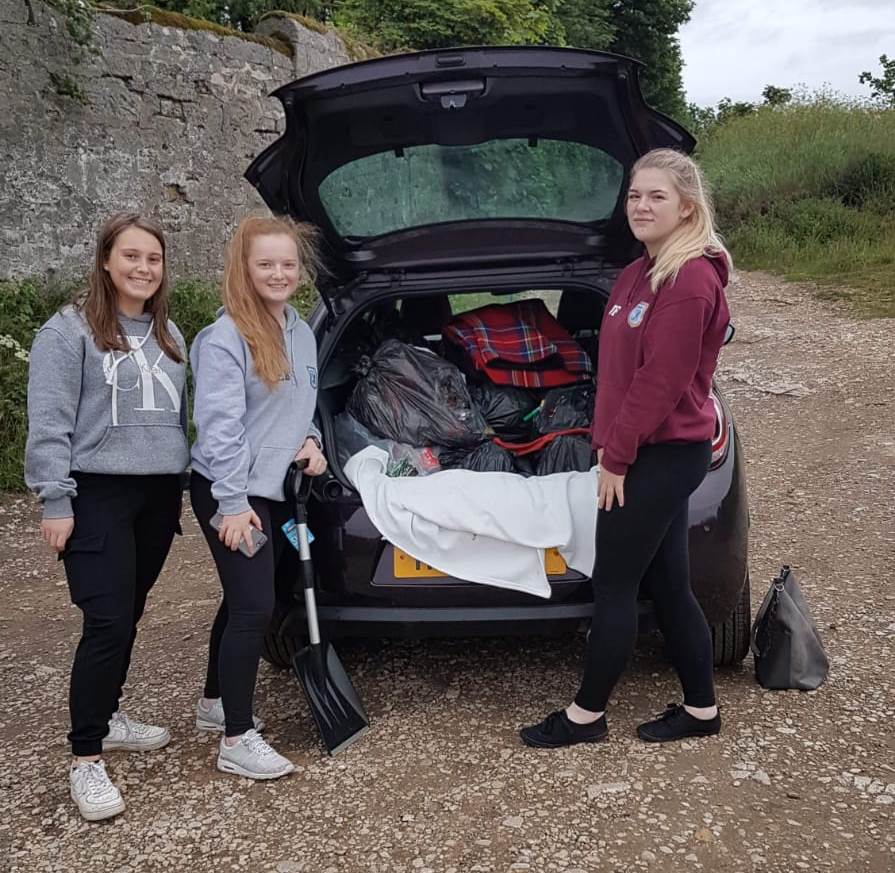 'They're a credit to themselves': Selfless students praised by police after initiating GCSE celebration clean-up

Three selfless students have been praised by police after going above and beyond to clean up their communities.

Sixteen-year-old Erin Sowerby, Emily Barker and Leah Ferguson were among thousands of teenagers across the region that finished their GCSE exams on Friday.

Large-group gatherings were held across Sunderland and South Tyneside as pupils revelled in their new-found freedom and celebrated the start of the summer holidays.

But after the evening passed without major incident, police were blown away by the actions of the three Whitburn Church of England Academy schoolgirls who set their alarms early on Saturday to make a positive contribution.

The trio picked up hundreds of bottles, cans and plastic cups that had been left strewn across Cleadon Hills following the previous night’s festivities – filling nine large bin bags of rubbish and two bags of broken glass from the ground.

They also found time to recycle the cans and bottles – and their actions did not go unnoticed.

Inspector Denise Easdon, of Northumbria Police, said: “We all know the sense of relief that can be felt when reaching the end of the school year, and as a result, we anticipated groups of young people congregating on Friday night to celebrate the start of their holidays.

“But what we did not anticipate was the incredible kindness shown by Erin, Emily and Leah, who all went above and beyond to look after their community and ensure it remains an attractive place to live and visit.

“Rather than enjoy a well-deserved lie-in after weeks of revision, instead they were up early filling bin bags with rubbish and remaining items that had been left following the previous night’s celebrations.

“They are an absolute credit to themselves, and I would like to thank them and all the other students across the region that behaved responsibly and cleaned up after themselves.”

John Crowe, principal at Whitburn Church of England Academy, praised the girls for their “selfless actions”.

“I am really proud of what the girls have done, they are an absolute credit to our Academy,” Mr Crowe said.

“We talk to our students about being part of the local community and engaging in social action and becoming courageous advocates for change. By their selfless actions I hope that they have helped to change the mindset of those who sometimes think negatively about the actions of young people.

“They are true ambassadors for the school.”

Plain-clothed and uniformed officers carried out increased patrols over the weekend as the Force anticipated an increase in reports of youth disorder due to the end-of-exam festivities.

Police also encouraged parents to make sure they knew where their children were and reminded shop owners that it is illegal to sell alcohol to children.

Chief Inspector Sam Rennison, of Northumbria Police, was delighted that the weekend passed without major incident and thanked the communities of Sunderland and South Tyneside for their cooperation.

“We were absolutely delighted with the behaviour of the overwhelming majority of Year-11 students who celebrated the end of their exams,” Ch Insp Rennison said.

“Officers were out on patrol throughout the weekend engaging with groups of young people and ensuring they were acting safely and responsibly.

“Over the past few weeks, we have worked closely with head teachers from schools across Sunderland and South Tyneside and I’d like to thank them for their support in ensuring our messages were heard and listened to by students.

“The overwhelming majority of young people are a credit to themselves and their local area, and this weekend proved that once again.”