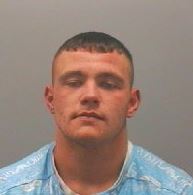 A boy racer who was already banned from the roads has been convicted of court again - after leading police on a dangerous pursuit at speeds of up to 88mph.

George Leighton, 22, has narrowly escaped an immediate prison sentence after admitting a spate of driving offences.

He was already disqualified from driving when he was spotted by police crossing a hatched area on the A1 in a Volkswagen Polo in January.

Officers checked the vehicle with the control room and found it was not insured and so they attempted to pull him over.

But Leighton instead slammed his foot on the accelerator and made his way on to the busy A167 motorway.

Leighton was recorded driving at speeds of up to 88mph and weaving in between traffic on at about 8.25pm in the evening.

His driving was so erratic that those officers in pursuit had to abandon the chase as the vehicle made its way into a built up area of the city.

However, later the vehicle was spotted on Stamfordham Road and this time Leighton did not get away after a stinger device was deployed by police.

He admitted the offences at North Tyneside Magistrates Court last month and now he has been sentenced by a judge at Newcastle Crown Court.

Leighton avoided an immediate prison sentence but was handed a one-year suspended sentence and handed an additional year-long driving ban.

Following the case, the sergeant at Northumbria Police's Operation Dragoon team condemned the boy racer's "reckless" behaviour on the road.

Sergeant Glen Robson said: “This was a case of dangerous driving involving an individual who was already banned from the roads and had no consideration for other road users.

"It was a fantastic job by Motor Patrols officers to bring this pursuit to a safe conclusion without anybody getting injured.

"George Leighton has narrowly escaped being sent to prison but I am glad he has been given an extended driving ban by a judge.

"If he is caught back behind a wheel then he will be brought back before the court and put behind bars.

"We are committed to making our roads a safer place and would ask that anyone who has information about a driver putting lives at risk on the road contacts police.”

A court had heard how the DVLA had revoked Leighton's licence due to health reasons but it was due to be re-instated on February 23.

He bought the VW Polo in anticipation for getting behind the wheel but it was the very next day that the police pursuit took place.

Leighton apologised for his actions and told a court that he had "stupidly" taken the car out for a little driver before "panicking" when he saw police attempting to pull him over.