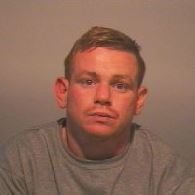 Helicopter footage has been released of the moment a driver tried to reverse into a police car and then led them on a high speed pursuit on the wrong side of a busy dual carriageway.

Oliver Howlett, 29, has been jailed for 14 months after he admitted dangerous driving following the police chase in Northumberland on January 6 this year.

He was spotted by police behind the wheel of a Mercedes Sprinter van that was straddling the lanes of a dual carriageway in Blyth.

Howlett, who was disqualified from driving, was holding up traffic to try and facilitate a horse and cart race ahead taking place ahead of him.

When police arrived the vehicle then attempted to flee the scene and began to travel on the wrongside of the Three Horse Shoes roundabout and on to Horton Road.

Officers switched on their lights and siren but Howlett refused to stop and led police on a pursuit through Northumberland.

In a bid to escape police he stopped on a narrow country lane and put the van in reverse in an attempt to drive into officers before speeding off again.

Footage from the National Police Air Service (NPAS) helicopter then captured him weaving between traffic, driving at speed on the wrong-side of the road and travelling the wrong way on roundabouts.

Howlett eventually brought the vehicle to a stop in the middle of the A189 spine road in Blyth after coming millimeters from causing a collision with oncoming traffic.

He was arrested by police and later charged with a string of driving offences that he later admitted at Newcastle Crown Court.

Now Howlett, of Lingcrest, Beacon Lough, Gateshead, has been jailed for 14 months by a judge and handed a four year driving ban that will begin upon his release from prison.

Following the case, Sergeant Glen Robson said that it was a "miracle" that Howlett did not cause a collision after leading police on a pursuit akin to "something in a Hollywood movie".

Sgt Robson, of Northumbria Police's Operation Dragoon team, said: "The footage speaks for itself. This was a man who had no regard for other road users and put the life of innocent people at risk.

"Not only has he driven in a dangerous and reckless manner but he has deliberately tried to ram police officers off the road and it is a miracle that he did not kill anyone.

"He took the law into his own hands because he was banned from the roads and his desperate attempt to flee police was his final bid to avoid being arrested.

"It was great teamwork by motor patrols officers on the ground, and the NPAS team in the air, that led to him being brought into custody safely, without a serious collision taking place.

"Now he has been put behind bars after finally facing up to his crimes. This sentence reflects just how seriously this type of offending is taken by both the police and the courts."

The helicopter was from NPAS Newcastle – one of 14 bases providing borderless air support to all police forces in England and Wales.

Ian Vause, Assistant Operations Director for NPAS in the North East, said: “Suspects have few places to hide when they’re being tracked from the air. The NPAS crew provided a running commentary to the pursuing police units, allowing effective tactics to be employed.

"We’re glad we were able to support our colleagues from Northumbria Police to help bring this incident to a safe conclusion.”

Howlett had admitted a charge of dangerous driving, driving without a licence and driving whilst disqualified at Newcastle Crown Court at an earlier hearing.