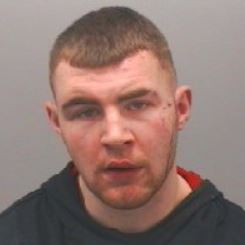 Man convicted for carrying a knife in Newcastle last summer

Door supervisors and officers have been praised after their quick thinking – and feet – resulted in a man being convicted of carrying a knife in Newcastle city centre.

Last summer a call was made by door supervisors at Floritas to police reporting that a man had been spotted with a knife.

Sergeants Jamie Bell and Graham Cockerill were on patrol in the city centre in the early hours of July 22 when the call came in.

They were sent the description of the offender and quickly identified 21-year-old Tony Gregorio as a suspect.

But when Gregorio saw officers approach he fled in the direction of Central Station – with Jamie and Graham quick on his heels.

A court was told how the foot chase lasted just seconds before Gregorio was tackled to the ground and brought into custody.

The flip-knife was later found underneath a nearby parked car after being thrown away by Gregorio during the chase.

He was later charged with possession of a bladed article and now he has been convicted after pleading guilty at Newcastle Magistrates’ Court on Thursday.

He said: "Jamie and Graham were very quickly on scene after the door supervisors contacted the police through the Pub Watch scheme.

"After identifying a suspect they were hot on his heels and what followed was what I would describe as good, old-fashioned police work.

"This is a great example of our door supervisors working with police to tackle suspected criminal activity in our night-time economy.

"It is one of the reasons why Newcastle is such a safe city and I am delighted that Jamie and Graham's actions have now resulted in a successful conviction at court."

Jamie, a Sergeant at Forth Banks Police Station, said: "These types of chases are the bread and butter for officers but it can be tough when you're carrying all the kit that we do.

"We were both worn out by the end of it but we made sure we were professional, made the arrest and secured any evidence that was available.

"It is down to the vigilance of the door staff at Floritas that ultimately resulted in this arrest and it shows how well the Pub Watch scheme works."

Gregorio, of Beech Grove Road, Newcastle, will be sentenced at North Tyneside Magistrates’ Court on March 22.