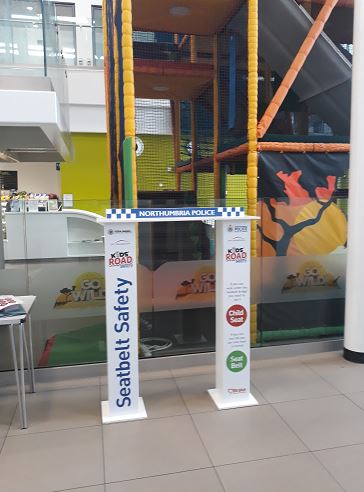 During the campaign officers from Neighbourhood and Motor Patrols were out and about across the force ensuring children, and the adults driving them around, were doing their part to stay safe.

As part of the campaign officers took to local supermarkets and leisure centres to promote their work and speak to young children about wearing a seatbelt and how it keeps you safe.

Officers also took along a specially designed bridge which, when a child walked under, depending on their height, showed whether they needed a booster seat or a seatbelt.

Police Community Support Officer Peter Johnson, who built the bridge himself in his spare time, talks about the initiative, how it started and the benefits.

He said: “The idea for the bridge came from Clive Broadhurst who works as a Road Safety Officer with West Midlands Police. Clive retired as a Constable but came back as a Special Constable to promote road safety.

“We worked together and he kindly shared his initiative which we were able to develop and brand with our force logo. It’s a great example of partnership work and proved a great success in our force area.”

West Midlands Motorway Policing Team Special Constable Clive Broadhurst said: “Our height bridge is very successful in getting the children’s full attention. We give them a presentation, appropriate to their age, about the protection a seat belt gives them and risk they are taking if they don’t wear one, even on short journeys.

“It is a great way of getting our message across both to the children and their parents and carers. People are not always aware of whether a booster seat or seatbelt is the right option to give their children the best level of protection. By using the bridge as a quick and simple way to measure children’s height, we are able to send them home with a letter, which helps their parents to make the right choices.”

Officers from Operation Dragoon were also out supporting the campaign by raising awareness and offering advice to motorists.

Sergeant Glen Robson, from Operation Dragoon, said: "I can't stress how important it is to wear a seatbelt. It can be the difference between life and death if someone is involved in a collision. Even on short distance journeys- belt up and stay safe- it’s not worth the risk.

“People know the obvious dangers of not wearing a seatbelt but some are unaware that anyone caught will be stopped by police, given safety advice and in some circumstances they could face a rather nasty fine.

“Our officers are always on the lookout for motorists not wearing seatbelts however; this campaign helps to highlight the dangers and the action being taken by police. It can cost people their lives and we need to get that message across.

"Legally all children must use a child seat until they reach the age of 12 or 135cm. It is a parent's responsibility to make sure they take every step they can to protect their children when in the car.”

Community Support Officers were also supporting the campaign by patrolling the streets and carrying out over 250 leaflet drops with information on how to stay safe behind the wheel and on the roads.

The work around teaching children how to stay belted up and safe doesn’t end with this campaign. PCSO Johnson and his team have plans to take the bridge into schools and community groups to continue their work around road safety.

And for information on child seats visit - www.gov.uk/child-car-seats-the-rules/using-a-child-car-seat-or-booster-seat