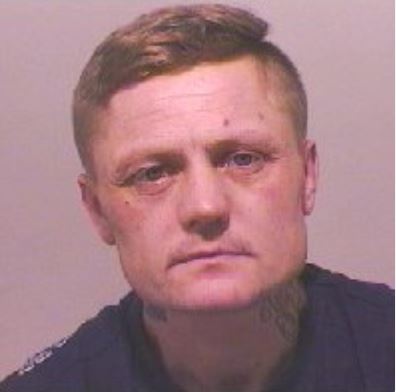 A burglar who raided Pizza Hut and tried to wash away his blood trail using a bottle of Pepsi has been jailed.

William Trotter, 37, smashed his way into the restaurant on St Luke’s Terrace, Sunderland, in the early hours of December 17 last year.

Trotter made off with £100, but after realising he had cut himself and left a pool of blood on the floor, he returned to the crime scene and tried to clear up the mess.

After a mediocre attempt to mop up the blood, Trotter, of East Vines, Sunderland, opened a bottle of Pepsi and poured it over the floor in the hope of covering his tracks.

This week (Wednesday), Trotter was jailed for four years and one month after admitting raiding Pizza Hut, as well as pleading guilty to three other burglary offences.

He also admitted one charge of common assault at Newcastle Crown Court.

Detective Constable Stu Havery, of Northumbria Police, said: “William Trotter went on what can only be described as an inexplicable burglary spree that caused widespread misery to both residents and businesses.

“He continually showed a blatant disregard for the law as he broke into both homes and commercial premises across the city to satisfy his own greed.

“Trotter is the latest in a line of serial burglars who’ve been locked up in Sunderland and South Tyneside this year, and I hope his sentence sends out an important message to other opportunistic offenders – you will be caught, and you will be brought to justice.”

As well as burgling Pizza Hut, the court was told that Trotter raided two homes on River View, Sunderland, in October last year.

After targeting the first property, Trotter, of East Vines, Sunderland, then forced his way into a second home and pocketed jewellery and cash.

However, when the occupants – a husband, wife and young child – returned home unexpectedly, Trotter hid behind the door before attacking them. He then made off following a violent struggle.

But he was caught by police after his DNA was found on a hat which he had inadvertently dropped while making his bid for freedom.

The light-fingered thief also admitted stealing Christmas presents from under the tree at a Sunderland hair salon in December 2018, along with an accomplice.

He then snatched dozens of delicately-wrapped Christmas presents that had been left under the tree for staff and customers, before swiping hair and beauty products from the shelf.

On Wednesday (March 27) at Newcastle Crown Court, Trotter was dealt with for the four burglary offences as well as a charge of common assault.

He pleaded guilty to all offences and was jailed for a total of 49 months. He now begins a stretch behind bars.