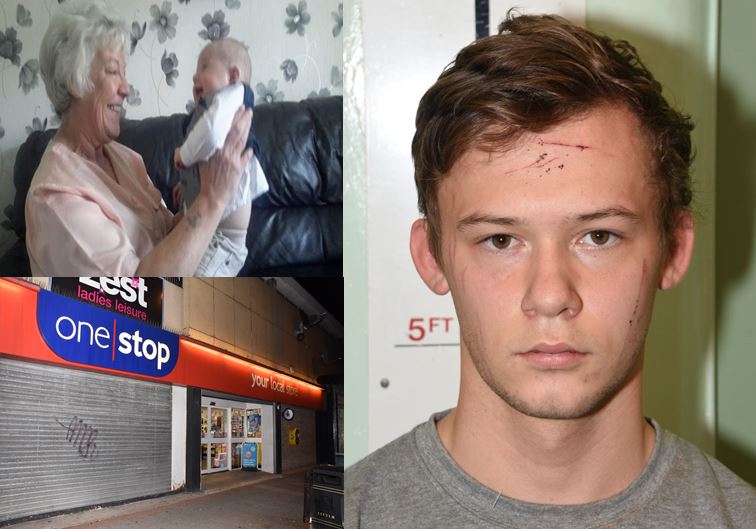 The heartbroken family of victim Joan Hoggett, 62, described her as 'the life and soul of any party'

A teenager who killed a shop worker during her shift in Sunderland has been detained in hospital under the Mental Health Act.

Ethan Mountain stabbed 62-year-old Joan Hoggett multiple times in an unprovoked attack as she worked at the One Stop shop on Sea Road on the evening of September 5 last year.

Mountain, of Heaton Gardens, South Shields, admitted manslaughter with diminished responsibility but denied murdering the grandmother – claiming he was “not in the right frame of mind” at the time of the offence.

Last week (March 13), a judge ordered a Newcastle Crown Court jury to find Mountain, 19, not guilty of one count of murder on the grounds that his mental responsibility for the killing was diminished.

Mountain, who was admitted to a psychiatric hospital in 2017 and treated with anti-psychotic medication, was back in the dock for sentencing today (Friday) and was told he would spend an indefinite length of time in a secure hospital.

In a victim impact statement read out in court, Mrs Hoggett’s daughter, Michelle Young, described her mother as “the life and soul of any party”.

She said: “It’s extremely difficult for me to put into words the impact of losing my mam, who was the rock that kept the family together.

“Mam was the reason for all our family events and she really was the life and soul of any party.

“I do not want to live fearing people, looking over my shoulder to see if they are going to attack. I just want life to be normal again, albeit without Mam here in person but forever in our hearts.”

Following the hearing, Superintendent Paul Milner, of Northumbria Police, praised Mrs Hoggett’s family and the team of detectives who worked on the case.

“It is clear from their heartfelt tributes and the reaction from the wider community of Sunderland that Mrs Hoggett was a well-liked and much-loved woman, whose death brought a considerable amount of sadness.

“These types of crime are rare in the North East, but in most cases the perpetrators are known to the victim. However, there was no link whatsoever between Joan and Ethan Mountain, who carried out this random attack.

“No outcome could ease the pain for Joan’s family and friends, who remain in our thoughts. I would also like to praise the dedication and hard work carried out by detectives who ensured Mountain had his day in court.”

Mountain, carrying a rucksack containing knives, left his home and walked to East Boldon Metro station before boarding a train to Seaburn at around 10pm on the night in question.

He was seen walking down Sea Road before briefly stopping outside the shop. He then pulled on a mask and entered before attacking Joan, who suffered fatal injuries.

Leaving his bag at the scene, Mountain was caught on CCTV running away from the store. He went on to discard the knife, a jacket he was wearing and his mobile phone as he fled.

Shortly after, the teenager turned up at a friend’s house. The friend subsequently contacted police and took Mountain to Whitburn Park, where he was arrested on suspicion of murder.

Over the next few days, police carried out a large-scale investigation which saw officers close off Roker Park, where a knife sheath was found which contained traces of Mountain’s DNA.

A team of divers also searched a pond inside the park for Mountain’s mobile phone, which was never found. The jacket he had worn during the attack was also found discarded in the garden of a property in Calderbourne Avenue.

Upon being charged with murder 36 hours after his arrest, Mountain responded: “It was not me; I was not in the right frame of mind.”

Mountain refused to cooperate with police in interview but later admitted manslaughter on the grounds of diminished responsibility during a hearing at Newcastle Crown Court in January this year.

Last week, the judge ordered the jury to deliver a not guilty verdict in respect of Mountain's murder charge based on the grounds that the defendant’s mental responsibility for the killing was diminished.

Today, Mountain was handed a hospital order and detained at Rampton Hospital indefinitely.