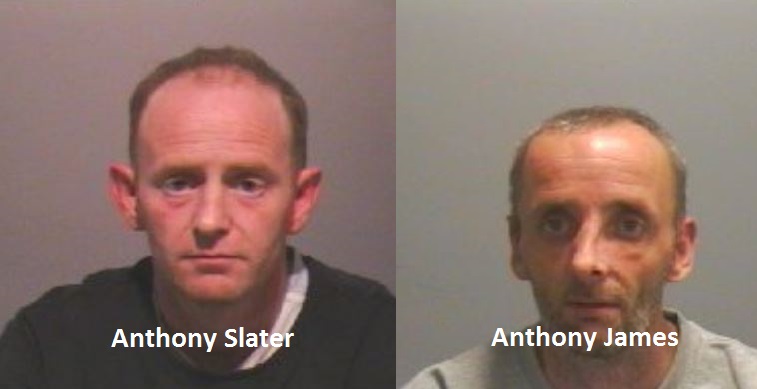 Two knifemen who tried to stab a man to death before barricading him inside his bedroom and setting his flat on fire have been jailed.

On Friday (March 1) Anthony Slater, 43, and Anthony James, 38, convicted by a jury of attempting to murder 38-year-old Frank Cartner.

The pair had gone round to the victim's home in Kenton to "slash his throat" over a fusebox which had allegedly been stolen from a young mother who lived nearby.

A court was told how the men then went to Mr Cartner's flat on Columbia Grange and slashed him across the throat.

They then lit three separate fires in the flat and barricaded him inside his bedroom before fleeing the scene to leave him to burn alive.

Mr Cartner desperately tried to escape but could not pull himself through a narrow window that was his only chance of escape.

Thankfully, firefighters arrived in time to pull him to safety after neighbours saw smoke bellowing from the property.

Mr Cartner was taken to hospital where doctors were able to save his life after emergency surgery to repair the hole in his neck.

Slater and James were arrested by police after being named by the victim and they were later charged with attempting to murder Mr Cartner.

They denied all the charges against them but they were convicted by a jury at Newcastle Crown Court.

Now Slater has been jailed for 23 years and James has been handed a 19 year sentence. Both men will serve an extended five years on licence following their release.

She said: "This was a violent and sustained attack that left the victim with life-threatening injuries and he is very, very lucky to still be alive.

"If it was not for the firefighters who dragged Mr Cartner from his bedroom, or indeed the neighbours who alerted them, then this could have been a murder trial.

"I have no doubt that James and Slater went round to that house that day with the intention of killing Mr Cartner and then set the flat on a fire in a bid to cover-up what they had done.

"I welcome the lengthy sentences handed down by the judge today and are glad that both of these men are now behind bars."

All three men knew each other prior to the attack and the offenders had even helped Mr Cartner set himself up in his new flat just five days before the attack on September 18 last year.

The court was told how the victim had no electricity and had allegedly stolen the fusebox the previous day in a bid to restore power to his new home on Columbia Grange.

When police confronted Slater and James about the incident they pointed the finger at Mr Cartner. The pair then decided to visit the young mother who owned the fusebox.

Slater and James had told her they were "disgusted" after learning the fusebox was used to power a device that her toddler relied on for medical reasons.

It was then that they headed over to Columbia Grange with the intention of murdering Mr Cartner and setting him and his home on fire.

James, of Colgrove Place, Kenton, and Slater, of Ambridge Way, Kenton, both denied attempted murder, arson with intent to endanger life and attempting to pervert the course of justice but were convicted by a jury.