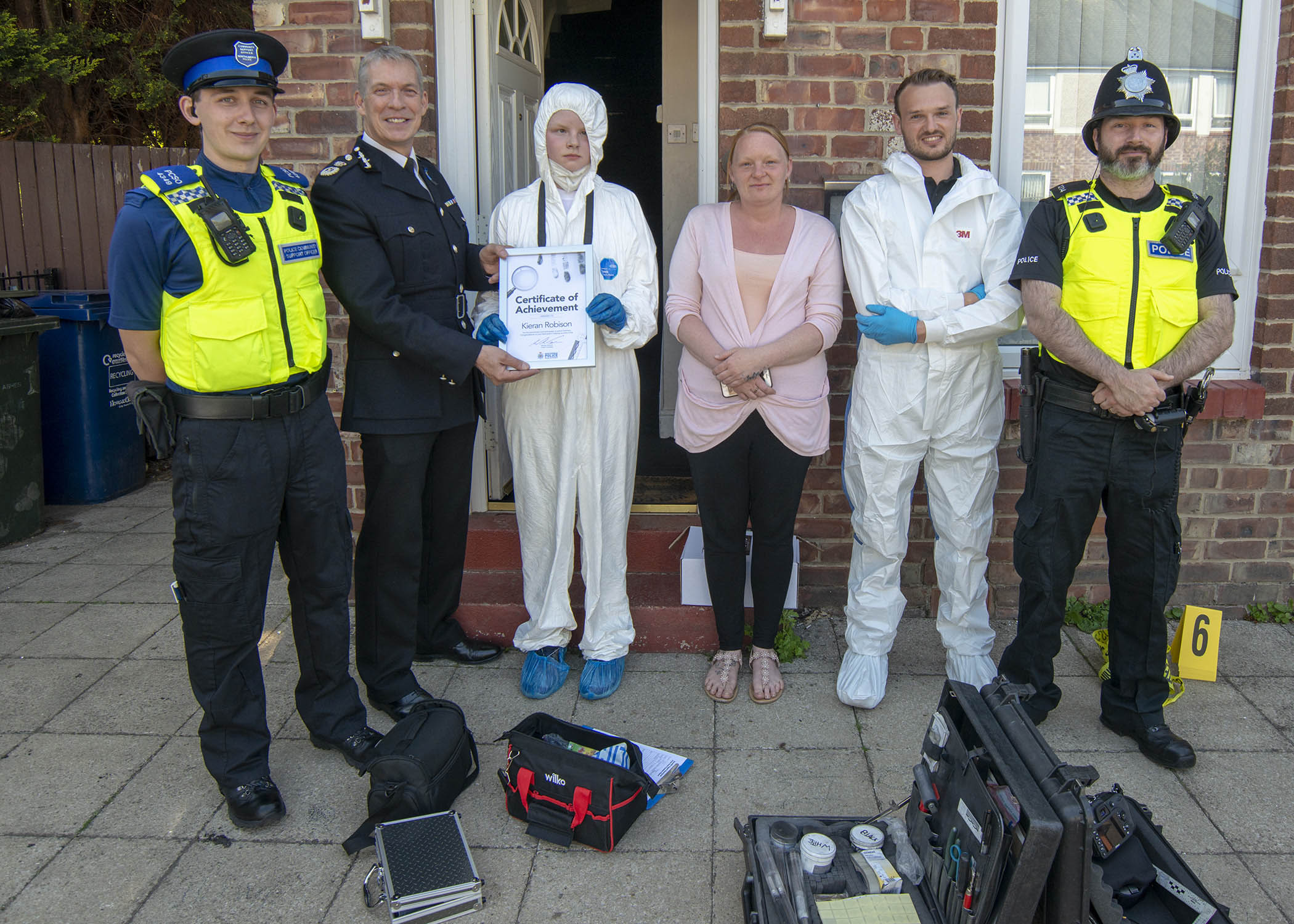 A schoolboy with dreams of working in forensics was this week visited by Northumbria Police's Chief Constable - who gave him the chance to be a CSI for the day.

Kieran Robison has been fascinated with the police since he was a toddler but has recently developed a keen interest in forensics.

The 13-year-old, who has autism, owns a white forensic suit, carries his own forensics kit and sets up crime scenes in his front garden to investigate.

When he sees police cars he takes pictures of the vehicles and has had some published in the local paper.

When Kieran realised that Northumbria Police's Crime Scene Investigators (CSI) were to feature in an access-all-areas TV show he made his mum download Twitter so that he could follow an online Q&A with the stars of the programme.

After learning about his love for the field of forensics, Northumbria Police got in touch with his mum Claire to find out more.

Chief Constable Winton Keenen organised for himself and a real-life CSI to pay a visit to their home in Walker to help Kieran work on a set-up crime scene.

He was able to meticulously gather evidence that was vital to solving the case and now his mother has thanked the Force for "an experience of a life-time”.

Speaking after officers visited her home, Claire said: “It started when he was about one, with emergency vehicles and as he got older it progressed into the forensics stuff.

“He cordons off my garden, gets his own crime scene out and does his own little investigations. He gets fake blood out and finger prints everywhere so he does the full lot.

“After one of the shows I noticed there was a live blog on Twitter and so I contacted the Force about his situation and they set all this up for us which was amazing.

“He has been looking in the vans, talking to officers, they’ve been up to his room to see his pictures and they’ve been able to look at all this forensic kit so he has loved showing that off.

“This is great for Kieran because he doesn’t get an opportunity to do this, you don’t just stop a police car and ask to look in their car so we are really grateful.

“I want to say thank you to everyone at Northumbria Police, he won’t forget today for a long time and it really means a lot to him.”

Chief Constable Keenen assisted Kieran in gathering the evidence needed and also presented him with a certificate and a box of CSI equipment.

He said he was delighted the forensic teams had helped to inspire the schoolboy and hoped the programme gave the public a glimpse into what goes on behind closed doors.

Chief Constable Keenen said: "It was fantastic to meet Kieran and his mum and I was blown away by his passion for the police and forensics.

"It is great to see people like Kieran inspired by what we do here at Northumbria Police and it was a privilege to give him the chance to meet the team.

"I could tell from all of his kit, and the way he examined the crime scene, that he has a real knowledge of the subject and he did a great job.

"We wanted to do the programme with the BBC to give the public an insight into what it takes to find justice for victims.”

You can catch up on all three episodes of ‘Forensics: The Real CSI’ on the BBC iPlayer's website after the last instalment aired on Wednesday night.

Watch Kieran's day as a CSI here
Play
back to top