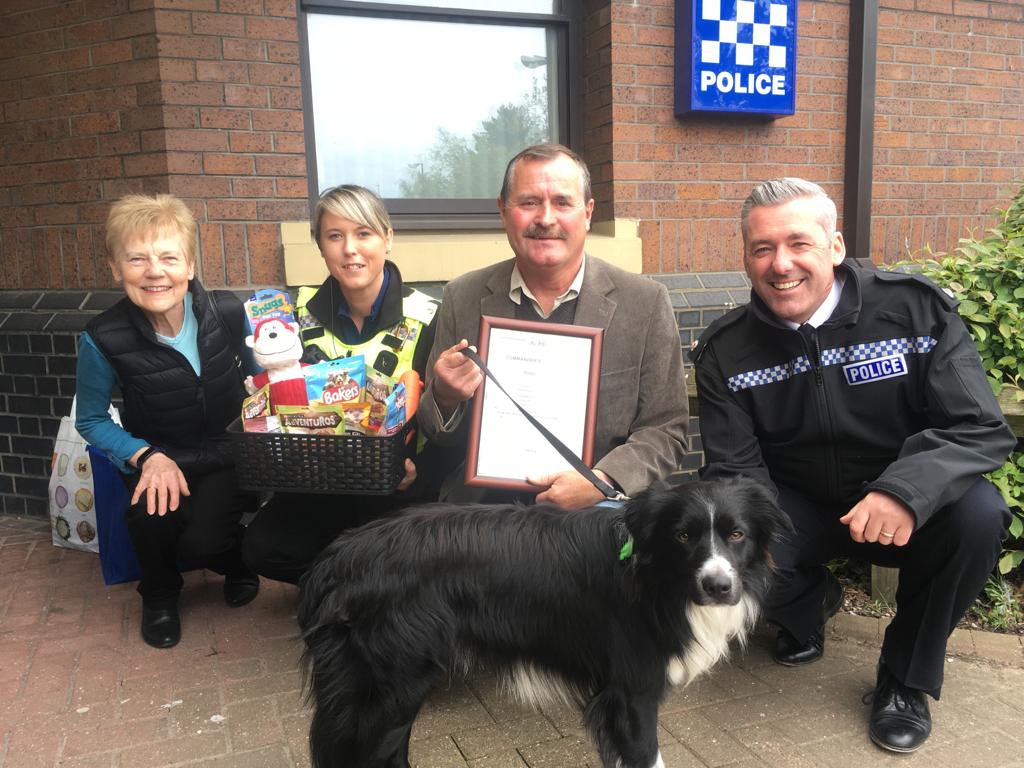 A dog walker who helped police locate a missing pensioner from South Tyneside has been given a special commendation.

George Dodds, 72, went missing from his Cleadon home on the evening of April 25, sparking a widespread search by officers and his family.

As the search entered a third day, landscape gardener Peter Collins – who knew George from the local area and had bumped into him a few weeks earlier near Boldon Flats – decided to try and help.

He and his border collie Ted began searching the fields around East Boldon, and found the distressed pensioner who had fallen down an embankment near the Metro line behind Sunderland Greyhound Stadium.

With George now recovering well in hospital, this week police invited Peter – along with Ted - into Millbank Police Station in South Shields to thank him on behalf of Northumbria Police for his efforts.

He was greeted by George’s wife, Helen, and awarded a special commendation by Superintendent Paul Milner.

And there were also some tasty treats for two-year-old Ted too, donated by Home Bargains, following his important role in the timely discovery.

“I’m just so pleased that George was found and brought to safety,” Peter said. “Ted is such an amazing dog, his senses are incredible and he’s proved himself to be a real hero.

“Without Ted, I wouldn’t have been able to find George. After hearing about the search, and given I’d seen George a few weeks earlier in that area, we made our way down the field and then Ted darted towards a hedge on the edge of the Metro line.

“I went to have a closer look, heard a noise and saw someone in a blue jacket lying behind the bushes and a fence. Thankfully it was George – he may not have survived another night.

“It was great to meet his wife Helen this week and be shown around the station, especially the control room where the search for George was coordinated by police.

“I’m overwhelmed to receive this commendation, and I know Ted enjoyed his treats! But the most important thing is that George is safe and well, and will soon be back home where he belongs.”

George’s wife, Helen, thanked Peter, Ted, police and the public for helping to find her husband.

“I’m so thankful to everybody who helped search for George over the three days, especially to Peter and Ted who made the discovery,” Helen said.

“He’ll soon be home and is currently being looked after by hospital staff and his family.”

Supt Milner echoed Helen’s gratitude and said the public played a vital role in helping police to find George and bring him to safety.

“The public are our eyes and ears and can play a huge role in helping officers in the search for high-risk missing people,” Supt Milner said.

“We were blown away by Peter’s actions during our search for George. He – along with Ted – really went above and beyond in their efforts and we thought it was only right to invite them into the station and give them due recognition.

“I know George’s wife, Helen, is so thankful to Peter for everything he’s done, and I hope the Commander’s Compliment he has received on behalf of Northumbria Police is a keepsake that he can treasure for many years to come.

“We are pleased to hear that George is now on the mend, and would like to reiterate our thanks to the public who aided officers with the search.”