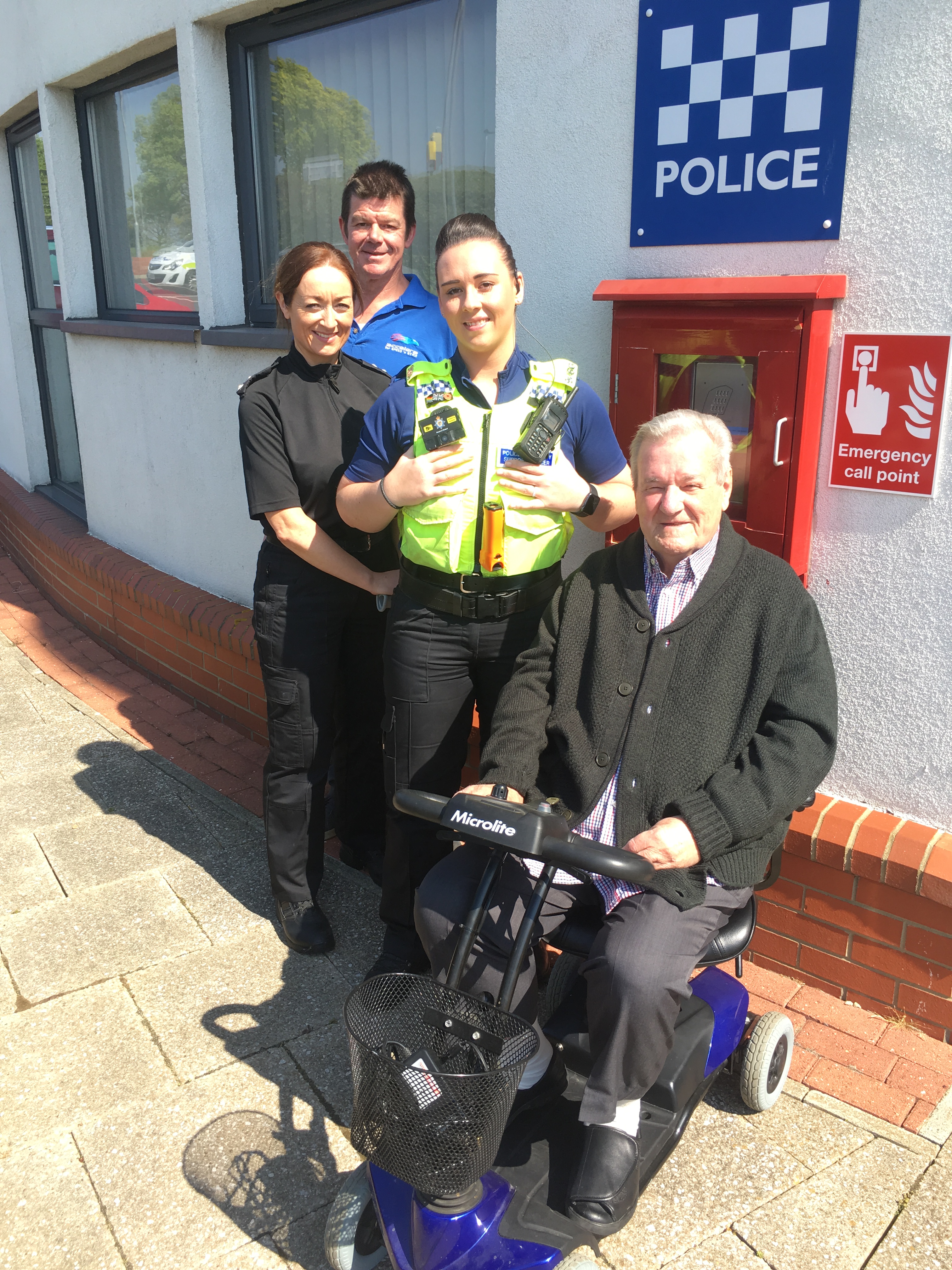 A pensioner who was left house-bound after a burglar stole his mobility scooter is on the move again after a special delivery by police.

Ernie Atkinson, 83, was the victim of a callous Christmas burglary in December last year as a cold-hearted criminal ransacked his Sunderland home and stole wrapped presents from under the tree.

The offender also helped himself to items of jewellery from the North Hall Road address, before making off in the family’s car which had been parked on the drive.

Ernie’s mobility scooter, which he relied on for his independence due to his lack of mobility, was stored inside the car and was also taken – and has never been recovered.

The real-life Grinch who stole Christmas was jailed for four years last month (April), and police have since secured a life-line for Ernie to make sure he is back on the road as soon as possible.

Community support officer Mel Sargent teamed up with Pallion Action Group and secured a new mobility scooter for him, which was kindly donated by local charity Veterans in Crisis Sunderland.

A number of local businesses were also quick to come to Ernie’s aid, with Wearside-based Auto Electrical Solutions donating two new batteries for the scooter and Paul Marriner, of Gordon Burnett Motor Engineers, fitting it and making sure it was road-worthy.

On Tuesday (May 14), Ernie and his wife Audrey were invited into Farringdon Community Fire Station to meet with the Sunderland West neighbourhood policing team, and admitted he was blown away by his surprise gift.

“I just can’t believe it,” said an overwhelmed Ernie. “I never expected anything like this – I’m so grateful to everybody concerned.

“Since the burglary last year I’ve been house-bound. I haven’t got a car now, and without my mobility scooter I found it difficult to get around.

“You never think you’re going to become a victim of a burglary, and you don’t realise just how difficult it can be until it happens. We lost the car, the mobility scooter, my wife’s diamond ring and a watch that I had been bought for our 60th wedding anniversary.

“I can’t put into words just how kind Mel has been, as well as all the officers who investigated the burglary. Everyone has been absolutely fantastic – I can’t praise the police and the local community enough.

“I’m overwhelmed by everyone’s kindness. I never expected this.”

Earlier this week, Inspector Marie Pollock and PSCO Sargent presented Ernie with the heart-warming gift and showed the couple around the station.

“Ernie and Audrey are both so lovely, and the burglary was devastating for them,” PCSO Sargent said.

“They are such a positive couple, and I knew I wanted to try and do something for them to help out. The day after the burglary, I went around and helped fit new motion sensor alarms and security equipment, and then I began to think whether we could arrange a way to help get Ernie out and about again.

“I’d like to thank Pallion Action Group, Auto Electrical Solutions and Paul from Gordon Burnett Motor Engineers who all played their part in giving Ernie a special day that he’ll never forget.

“I look forward to seeing him outside on his scooter, enjoying the summer sunshine in the months to come.”