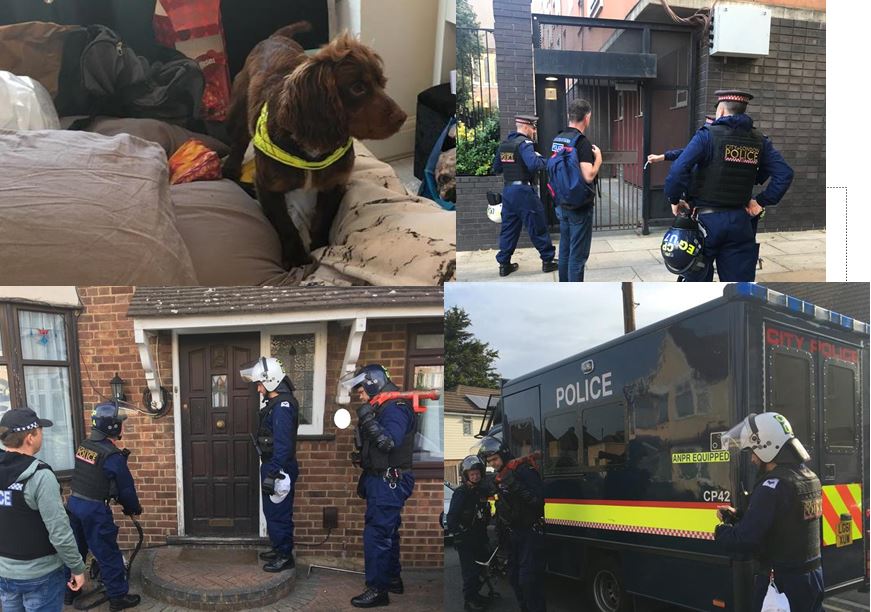 The arrests followed targeted strikes on eight properties across London, Essex and Kent carried out last Tuesday and Wednesday in relation to a suspected courier fraud scam which targeted elderly victims across the UK, including Newcastle, Durham and Northumberland.

Specialist officers from NERSOU and Hertfordshire Constabulary were supported by teams from the City of London Police, along with their specially-trained search dog, PD Fred.

As part of the scam, victims were cold-called by fraudsters posing as police officers who told them their bank accounts had been hacked and items had been bought with their debit cards. Victims were then told to hang up and dial The Metropolitan police on 161 and report the crime, unaware the fraudsters were actually still on the line posing as the officers.

The victims were then coerced into believing they were an essential part of the police investigation, and were asked to withdraw funds, package up their valuables and bank cards and send these to the ‘officers’ via a courier who would attend their home address.

Detective Sergeant Shaun Fordy from NERSOU said: “Courier fraud is an extremely complex crime which defrauds victims of their savings and their peace of mind.

“Victims of fraud are often made to believe they are dealing with a professional and reliable organisation, when in fact they are unknowingly handing over their valuables to criminals and this can have long-lasting and detrimental consequences.

“We want to reinforce the message that no police force or organisation would ever ask anyone to hand over their valuables, withdraw cash or send us anything via a courier.

“As part of Operational Sentinel, our initiative to tackle serious and organised crime, we will actively pursue those offenders who target and exploit vulnerable people in this way, and work alongside our partners to bring them before the courts.”

A number of items were seized following the visits, including mobile phones, cash, jewellery and a quantity of Class A drugs.

“As the national lead force for fraud, we work hard to identify, investigate and detect fraud and cyber crime, through our National Fraud Intelligence Bureau and Action Fraud.

“The Banking Protocol was piloted as a way of tackling increasing levels of this type of fraud.  Police forces and banks work together to combat courier crime and stop frauds in which victims are tricked into going into their local branch to withdraw or transfer funds to pass on to fraudsters.  Bank staff play a key role in spotting suspicious activity and alerting police who can swiftly respond.  During the pilot, success in tackling courier fraud more than quadrupled.

“This case, where fraudsters preyed on elderly and vulnerable people, demonstrates how effectively a report to your local police force or Action Fraud can lead to fraudsters being brought to justice.”