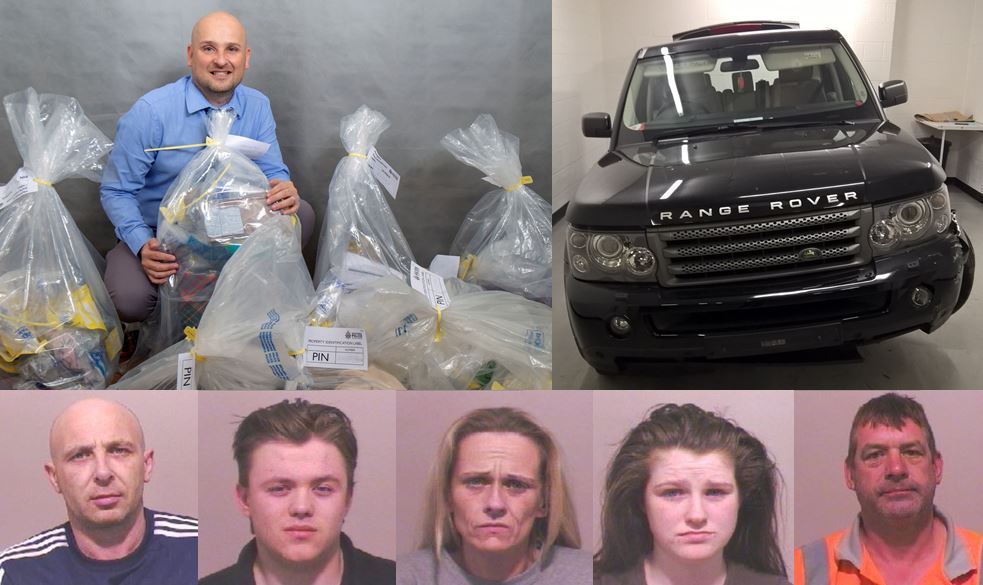 The officer who led the investigation into a £170,000 burglary conspiracy across the North-East believes the offenders’ sentences send out a strong message.

Steven Crombie, 40, was jailed for more than seven years on Friday (May 10) after carrying out a string of burglaries and car thefts across Sunderland, South Tyneside and Durham last year.

He and associate Brandon Meah, 20, raided homes and broke into vehicles during a callous crime spree, with thousands of valuable and sentimental items stolen from victims.

PC Graeme Rockett led the complex 14-month investigation which saw thousands of hours put in by police and hundreds of CCTV clips pored over by detectives.

With the ringleaders now behind bars, PC Rockett hopes their sentences reinforce Northumbria Police’s commitment to tackling burglary and send out a strong message to would-be offenders.

“This was the biggest investigation I’ve ever been involved in,” PC Rockett said. “The scale of it was massive. In terms of the damage to property and items stolen, Crombie’s criminality equated to a loss of more than £170,000 for his victims.

“He broke into properties with no knowledge of what he’d find inside. Instead, he turned houses upside down and grabbed anything of value. In one of his burglaries, he even stole pillow cases and filled them up with items that he had swiped from the mantelpiece.

“Burglary is one of the most serious, personal and intrusive crimes that somebody can commit. It can have a long-lasting effect on victims and can make people become frightened or anxious in their own home.

“When you finish work and go home, when you step through your front door, that should be your safe haven where you can relax and feel comfortable. Nobody should have to walk through their front door and see their world literally turned upside down.

“That’s why there was a real determination to make sure those involved were brought to justice.”

Crombie’s first burglary came in March 2018 when he broke into an address in Cleadon, South Tyneside, and stole more than £36,000 in cash, quantities of jewellery and a black Range Rover.

The vehicle was later found to have been used by Crombie and his associates to commit a number of other crimes over the next three months, with the criminals using stolen registration plates in a bid to avoid detection.

“When the various burglaries were being reported to us, at one point we had the whole burglary team in Southwick working on this case,” PC Rockett said.

“It soon became apparent that the stolen Range Rover was popping up across the region and was believed to be linked to many of the offences.

“Crombie’s offending was indiscriminate. He stole anything that he thought he’d be able to get money for – from ornamental swords and musical instruments to jewellery and perfume.

“But he also stole sentimental items of no real financial value. A decorative urn containing the ashes of a victim’s deceased father was taken from a property on Success Road in Houghton-le-Spring and has never been found.

“The victim’s mother recently passed away too, so she’s desperate to reunite her mum and dad’s ashes. If somebody thinks Crombie may have given them this distinctive urn, and they received it without realising it was stolen, please bring it back – it can be dropped off at a police station anonymously.”

The breakthrough on the case came on May 9 last year when Crombie inadvertently cut himself as he smashed his way into an address in Woodstone Village, County Durham, and left his DNA at the scene which came back as a forensic match.

Then on June 11, just three days after a separate burglary in Whitburn, Crombie was seen entering a pawnbroker in Newcastle with partner Robinson and sold some of the stolen jewellery for £738.50.

A cigarette that had also been mistakenly dropped between the front driver and passenger seat of a car that had been broken into on Bede Street in Sunderland also contained traces of Crombie’s DNA.

With the net tightening on the suspects, police executed a warrant at Crombie and Robinson’s address in Hampstead Square, Sunderland, and recovered a number of items identified to have been stolen in the previous burglaries.

Further suspected stolen items were also located in addresses belonging to Meah and Churchill, as well as a garage in Witherwack and a storage unit on Colima Avenue, Sunderland, which had been opened by Robinson.

PC Rockett added: “On the day Crombie was arrested, I was at the station for 21 hours dealing with him because we were all so determined to make sure the right charges were brought and ensure he and everyone involved had their day in court.

“As a police officer, you do feel personal responsibility for a case that you’re in charge of. I went home and would constantly think about the investigation, and then a few hours later I’d wake up on the morning thinking about it.

“Our priority is to protect the public, make sure those who threaten the fabric of our communities are correctly identified and then rightly held to account for the crimes they commit.

“Three defendants in this case were handed custodial sentences, and I hope that sends a message to both the communities we serve and criminals out there; we take burglary incredibly seriously and will do everything in our power to bring offenders to justice.”

Crombie, of Hampstead Square, Sunderland, admitted conspiracy to commit burglary and was jailed for seven years and two months due to his guilty plea.

Meah, of Rutland Street, Sunderland, pleaded guilty to conspiracy to commit burglary and received a sentence of three years and seven months.

Churchill, of Rutland Street, Sunderland, pleaded guilty to assisting an offender and was handed an 11-month sentence, suspended for 12 months, plus 150 hours of community service.