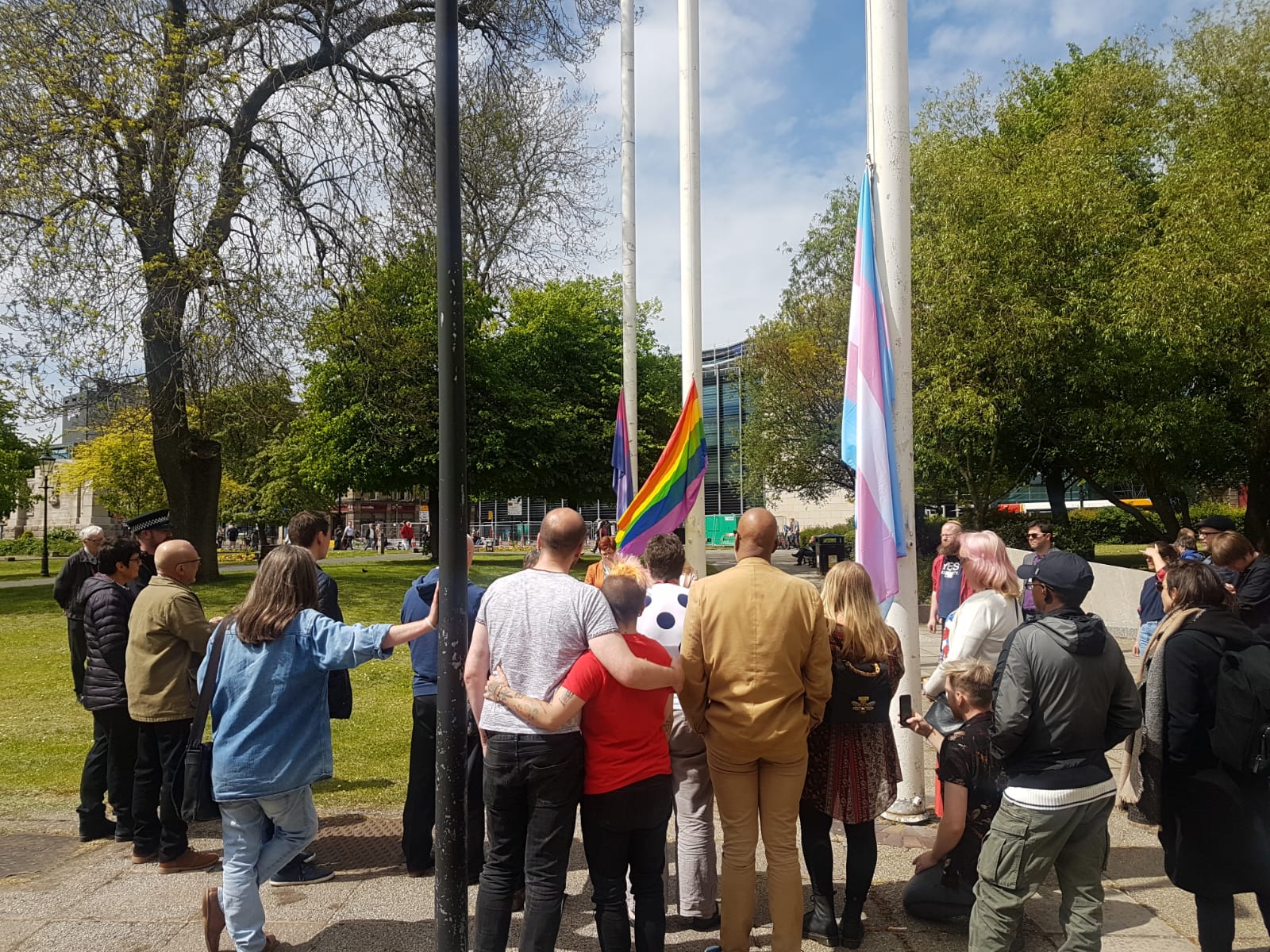 Northumbria Police has teamed up with partner organisations to hold an event in support of the LGBT community.

Today is the International Day Against Homophobia, Biphobia and Transphobia (IDAHOBIT) and the Force has joined Newcastle City Council in a symbolic raising of the transgender flag.

IDAHOBIT is a day all about raising awareness of the discrimination still faced by the LGBT community, both in the North East and throughout the world.

At midday they raised the flag outside Newcastle Civic Centre and an event was held where speakers talked about LGBT discrimination.

Northumbria Police and Crime Commissioner, Dame Vera Baird QC, said: "Absolutely no one should be victimised for being who they are and I am fully committed to ensuring that all communities are listened to here in Northumbria.

"Putting victims first and tackling hate crime are important priorities for me and I fully support this latest project which sees organisations coming together to make such crimes a thing of the past.

"I urge anyone who has experienced any abuse because of their gender or sexuality to come forward and seek help and support."

Northumbria Police’s Superintendent Karl Wilson said: "We take hate crime extremely seriously and we want victims to know that they can report these incidents to police.

“IDAHOBIT is an important day for us all the celebrate as we all have a sexual orientation and a gender identity and have the right to have this respected, and be free to be whoever we are.

“We really want anyone who is targeted in this way to come forward. If it has happened to you it could happen to someone else and we will take action.”

Cllr Joyce McCarty, deputy leader of Newcastle City Council, said: “I’m proud of the work that goes on in our city towards equality and this is a fitting way to further that by marking International Day Against Homophobia, Biphobia and Transphobia 2019.

“Unfortunately though, people still find themselves discriminated against for things such as their identity and sexuality. The message for us remains clear: this will never be accepted.

“Newcastle is an open city which is welcoming to everyone without exception. Days like this show that those who find themselves subjected to hate crimes of any nature have the support to report what has happened.

“What makes this year stand out from others is that we’ve raised the three flags – bi, trans and rainbow - to show that we all stand alongside each other regardless of what makes us who we are.

“Last year, we commissioned a new hate crime reporting service through StopHate UK and I would take this opportunity to remind people of this anonymous method of reporting hate crime. All you have to do is visit stophateuk.org.”

The theme of the event was ‘Justice and Protection for All’ and those in attendance include MESMAC North East, SHINE, Unison, Northern Pride, Northumbria Police, Tyne and Wear Fire and Rescue Service, North East Ambulance Service, Virgin Money, both cities universities and the NUTH Chaplaincy.

Melanie Costello, Northumbria University Crime Prevention Supervisor, said: “Becoming the first higher education institution to commit to this initiative reflects the importance that we place on providing a safe and supportive learning environment for all.

“I’ve been thrilled with the response from our students who have a real and genuine desire to see the end of hate crime on their campus and beyond.”

For information on different types of hate crime and advice on how to report it, including specific information about third party and safe reporting schemes in your area, please visit: http://www.northumbria.police.uk/