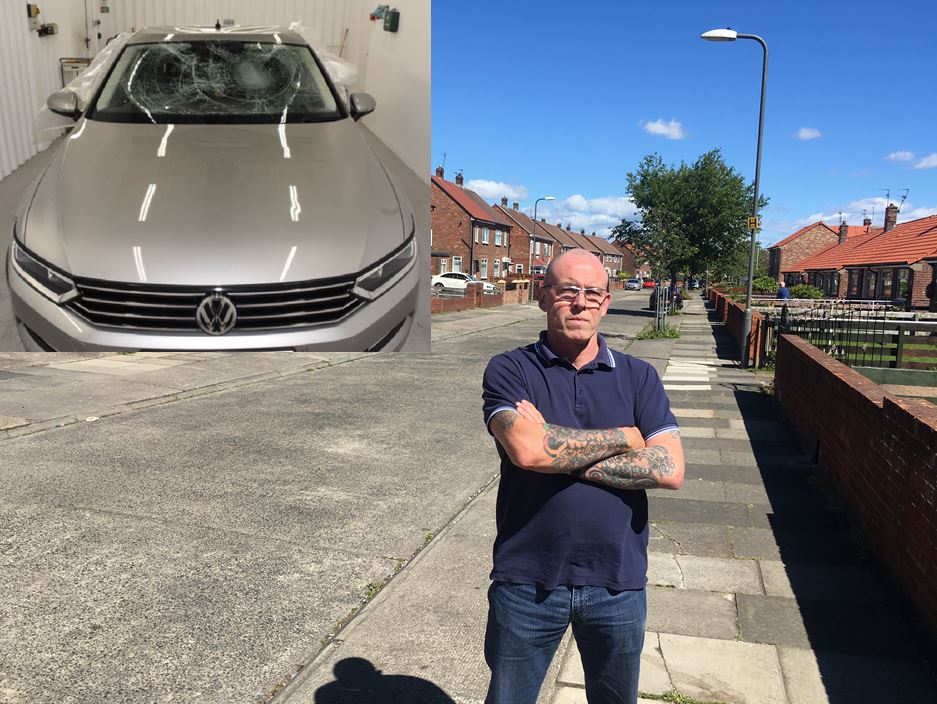 A taxi driver was left out-of-pocket for three weeks after heartless vandals smashed up his cab in the dead of night.

Colin Brown, 54, has worked as a taxi driver in South Tyneside for the last two decades.

But he was recently forced to take an unwanted break from the job he loves after offenders destroyed his cab while he lay fast asleep in his Hebburn home.

Upon hearing the commotion and the smashing of glass on the street outside, a neighbour went out to investigate – and alerted Mr Brown that his car had been smashed and severely dented.

“This is my livelihood,” said the Express Taxis driver, who has urged for any witnesses to the incident to come forward and contact police.

“I’ve lived on Toner Avenue for three years and it’s a quiet street – nothing ever happens down here. Nobody can quite believe what happened.

“I’ve never had any issues with anybody, I love driving my cab and it’s hard to understand why I may have been targeted in this way. The damage was horrendous and I was left without a car and without income for three weeks.

“We’ve all got bills to pay, money going out – it was such a frustrating time. My mother was in hospital recovering from a brain tumour, so I had to find a way to see her without having a car.

“I don’t think those responsible understand how their actions can affect people. Thankfully, I’ve now been sorted out with a new cab and I’m back on the road - but I’d ask anyone who knows anything about what happened to contact police.”

Police were alerted to the incident shortly after 12.30am on April 30 and found the car’s windscreen had been smashed, along with four windows.

There was also substantial damage to the roof as the vandals dented the top of the car, jumping up and down on it, before fleeing the scene.

An investigation was launched to trace those responsible and Mr Brown’s vehicle was taken away for analysis by the Force’s forensic experts.

Inspector Denise Easdon, of Northumbria Police, said: “This was a heartless act that has had a significant financial effect on the victim.

“Intentional acts of criminal damage such as this are totally unacceptable, and we are appealing to anybody who saw anything in the Toner Avenue area on the night in question to come forward.”

You can also get in touch with police by emailing 7018@northumbria.pnn.police.uk or online atwww.northumbria.police.uk.