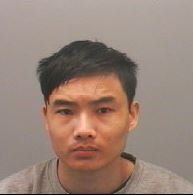 Khang Van Tran, 30, has been jailed for 12 months following the discovery at an address in Scotswood

A Vietnamese drug dealer who ran a huge cannabis factory out of his home has been jailed - after police seized £100,000 worth of drugs.

Khang Van Tran, 30, has been jailed for 12 months after nearly 9kg of cannabis plants were seized from an address in Newcastle.

Officers decided to raid the property on Broadwood Road in Scotswood after residents reported suspicious activity at the address.

They told police they had seen numerous visitors going in and out of the three-storey house in the West End of the city.

A court heard how five bedrooms in the property had been turned into make-shift cannabis farms with more than 150 fully matured plants.

Cannabis buds and production equipment was also seized with drugs experts later estimating the haul of drugs to be worth in excess of £100,000.

Tran was found by police inside the house when it was raided and he was arrested before later being charged with the production of cannabis.

The Vietnamese migrant admitted the charge and at the end of last month he was jailed for 12 months at Newcastle Crown Court.

Tran, of no fixed abode, was also told by a judge that he would be deported when he leaves prison at the end of his sentence.

Following the case PC John Loraine, who is the neighbourhood beat manager for Scotswood, thanked residents for reporting suspicious behaviour.

He said: "There is no doubt that this is serious and organised crime but this raid put a big dent in this gang's operation.

"We do find the odd cannabis farm in a loft but this was a three-storey house in which every room was being used to produce drugs.

"It was a sophisticated operation that was being run like a factory and we are delighted to take these drugs off the streets.

"This particular individual was heavily involved in the production process and for that he will spend time behind bars.

"What is more is that he will be deported upon his release from prison and will no longer be able to profit from criminality in our region.

"I want to pay a special thanks to residents in the area who noticed something wasn't right with this address and contacted police.

"If you report concerns to us then this case shows we will take action, we will make seizures, we will make arrests and people will be put behind bars."

Tran was sentenced at Newcastle Crown Court on April 24 after previously entering a guilty plea at the same court.

Anyone who has concerns about criminal activity or suspicious behaviour in their neighbourhood is encouraged to contact police.

You can call officers on 101, email central.intelligence@northumbria.pnn.police.uk or report it online at www.northumbria.police.uk.

If you want to report information anonymously then you can call Crimestoppers on 0800 555 111.