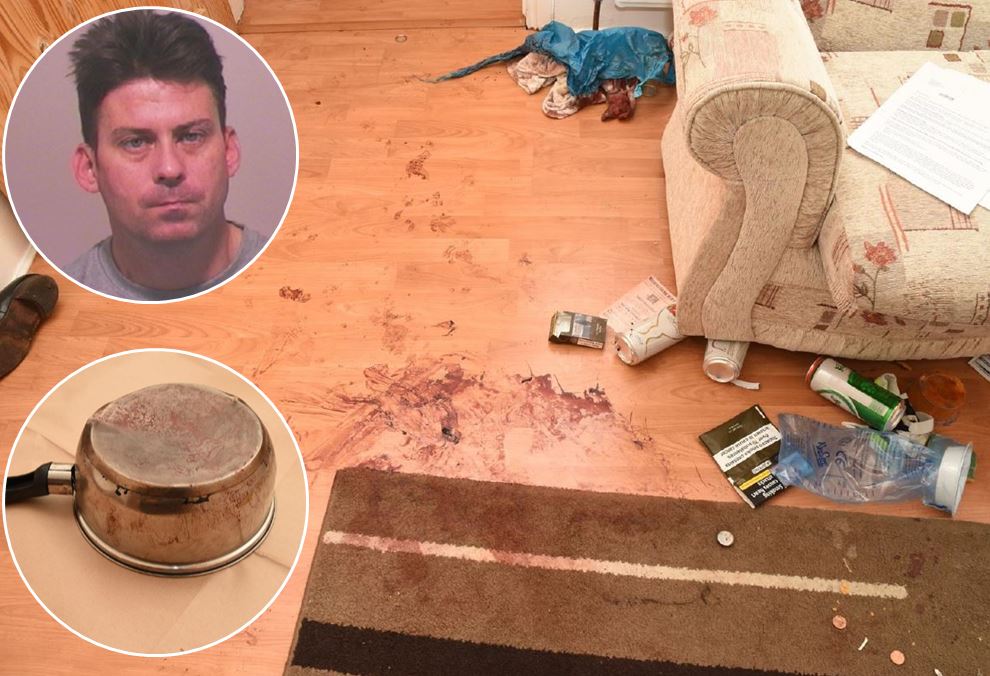 Read, 38, was found guilty of wounding with intent to commit grievous bodily harm following the incident in Sunderland last year

A dangerous thug faces being behind bars until 2033 after beating a woman unconscious with a saucepan.

Darran Read, 38, met his victim in a nightclub and invited her back to his Sunderland home for a few more drinks in August last year.

But what started as a charming evening turned into a night of horror for the woman as Read suddenly snapped into a violent rage and carried out the unprovoked attack.

Covered in blood and with serious injuries to her head, arms and face, the helpless victim feared for her life as Read continued drinking and prolonged her suffering by refusing to call 999.

Read, of Roseville Street, Sunderland, was found guilty of wounding with intent to commit grievous bodily harm following a trial at Newcastle Crown Court in May.

Yesterday (Monday), a judge jailed him for 14 years with an extra four years on licence.

Following the sentencing, Detective Constable Jonathan Dent, of Northumbria Police, said: “This was an incredibly upsetting and horrific case that saw a man befriend a woman on a night out, before carrying out a horrendous and sustained attack on her.

“The victim was absolutely terrified and feared for her life as this charming stranger turned into a monster, causing her devastating injuries after hitting her over the head with a saucepan.

“Read is a clearly a danger to society and cannot be trusted to live lawfully in our community. He showed no remorse at any stage of this investigation, and there can be no doubt that his victim will have to live with the consequences of his disgraceful actions for the rest of her life.

“I sincerely hope this sentence can give the victim some kind of closure following this awful incident, and I would like to thank her for her amazing bravery throughout this case which enabled us to take a dangerous offender off the streets.”

The court was told Read met his victim at Arizona nightclub in Sunderland on the evening of August 31 last year and struck up a friendship.

But after she agreed to go back to his home for a few more drinks, Read’s mood suddenly shifted – and he went on to carry out the sustained attack.

The victim spent a number of days in hospital following the ordeal and said she believed that her life was in danger.

In a statement read out in court, the woman said: “I am absolutely distraught at what Darran Read has done to me.

“He attacked me in what I can only describe as being the most horrific time of my life and I truly believe he was trying to kill me. The attack caused me so much pain, I was in hospital for days after and when I was released I couldn’t look after myself as my arms were in casts.

“Since the trial I have been waking from my sleep after having nightmares. In these nightmares, I could see Darran Read in my home – he would take a knife from the kitchen and then stab my son to death. It is absolutely horrific to have these nightmares night after night – it is killing me from the inside.”

In a trial in May, Read was convicted of wounding with intent but cleared of attempted murder, rape and false imprisonment.

On Monday, Read was jailed for 14 years.