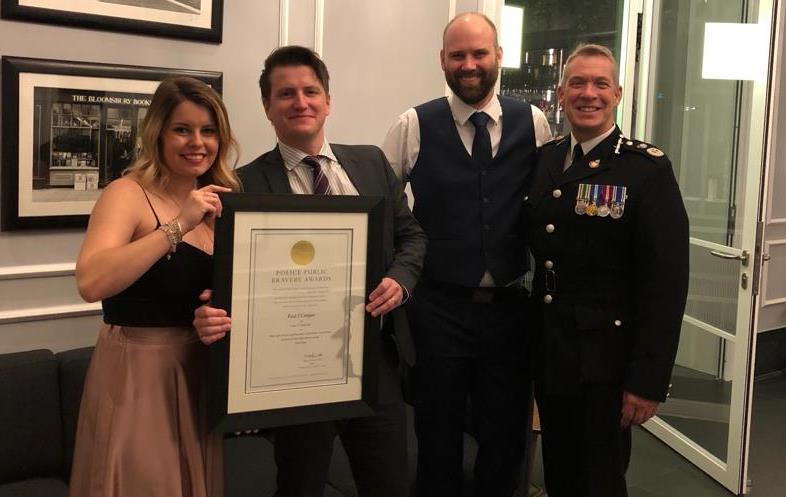 Two Good Samaritans who sacrificed their own safety and acted as peacemakers during a violent altercation have received national recognition.

Paul Cooper and Dean Jukes were waiting to board a train at South Shields Metro Station in March last year when an argument broke out on the platform between a man and a group of 15 teenagers.

As the altercation escalated, Paul and Dean stepped in and temporarily defused the situation – before the violence continued on King Street.

The pair again intervened and stopped the fight before remaining at the scene until police arrived.

In recognition of their bravery, Paul, 37, and Dean, 38, both won a Silver Medal at the Police Public Bravery Awards 2019, which was held in London last week. (October 28).

The annual awards recognise the exceptional actions of members of the public who have placed themselves in dangerous situations in order to protect others, help the vulnerable or prevent a crime from happening in the first place.

“I am absolutely delighted that Paul and Dean have been rightfully recognised following their extraordinary act of bravery,” Chief Constable Keenen said.

“We would never encourage members of the public to put themselves in harm’s way. However, these awards are a vital way in rewarding those who do put their own safety selflessly to one side.

“They should be very proud of what they did and I would like to thank them on behalf of Northumbria Police for going far beyond what was expected of them before our officers could arrive.

“The spirit shown by Paul and Dean is truly humbling and I was delighted to attend the awards to thank them personally on behalf of the Force.”

“I am incredibly proud of the strong community spirit across Northumbria and this was another extraordinary example of that,” Commissioner McGuinness said.

“It would have been very easy for Paul and Dean to ignore what they saw, to turn the other way and continue with their every-day lives. However, their heroism prevented an already volatile situation from becoming even more serious.

“As a result, I feel it is important to say thank you to those who show incredible bravery and who place themselves in dangerous situations while actively helping officers protect the communities we serve.”

Shortly after 7pm on March 23 last year, an altercation occurred between a man and a group of 15 young men and women at South Shields Metro Station.

The argument soon descended into a violent confrontation, with the man throwing punches at one of the group members. This resulted in the teenagers knocking him to the ground, repeatedly punching him.

After Paul and Dean stepped in to help calm the situation, the group left the station and headed towards King Street – but the man, agitated and angry, followed them.

Mindful of the potential for a further flare-up, Paul and Dean left the station and followed the man – and witnessed a violent altercation break out again in the middle of a busy street.

The man attacked another youngster which instigated a sustained attack by the group, resulting in the man being repeatedly kicked and punched on the floor.

Paul and Dean again bravely stepped in to stop the unrelenting attack and remained at the scene until police arrived.

An investigation was launched into the disorder and three people – a 29-year-old man, 15-year-old male and 16-year-old female were all convicted of threatening behaviour.

A further three individuals were dealt with via the Youth Offending Service.