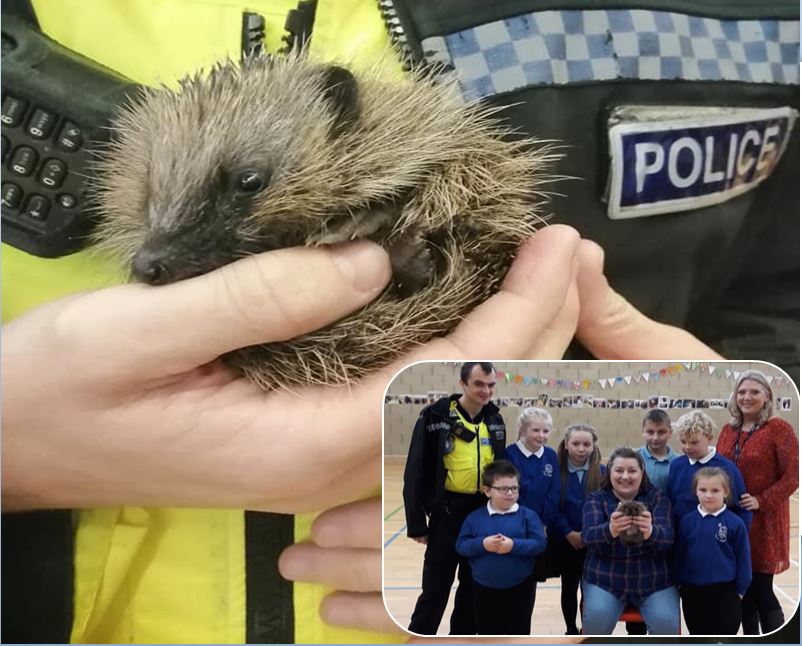 A £1,000 reward offered after a hedgehog was tragically kicked to death has been reinvested to help educate the next generation.

Two boys aged 14 and 11 were last week convicted at court and handed criminal records following a police investigation into the upsetting incident in Sunderland.

The pair inflicted fatal injuries on the hedgehog, dubbed ‘Little Man’ by neighbours, and he was consequently put to sleep by vets as a result of the offenders’ thoughtless actions.

During the investigation, the British Hedgehog Preservation Society offered a four-figure reward for anyone who passed information to police that led to a successful prosecution – but officers had already identified the likely culprits and were finalising the case.

As a result, wildlife officer PC Peter Baker asked the charity to put a portion of the promised reward money to a different use – to buy a number of hibernation pods which can be used to help educate youngsters in schools about hedgehogs.

There the children got up close and personal with the hedgehogs and were taught about the importance of animals and what to do if they come across any that are injured.

“As you would expect, there was a lot of public outrage when the crime against the hedgehog came to light and the two offenders will now be dealt with by the youth offending team,” PC Baker said.

“But what’s really important is that a positive has come following that awful case, and the reward money offered by the British Hedgehog Preservation Society has now been used to help educate children about these animals and preserve them for years to come.

“The kids at Southwick Primary School absolutely loved meeting the hedgehog and learning all about them. We also donated a hibernation pod to the school, which will help animals stay safe and not be subjected to attacks.

“Education is the key, and we’ll be looking to go into more schools in the coming months to help spread the word.

“We’re a nation of animal lovers – so I will continue to work tirelessly to educate the public and bring anyone who hurts or abuses animals to justice.”

“It’s really important to teach our young people about animals, how to look after them and the potential consequences people can face by causing them unnecessary harm,” she said.

“The children responded brilliantly to the lesson and loved holding the hedgehog. I’d like to thank PC Baker and Bernie for taking their time to come in and help raise awareness of a very important subject.”

Last Thursday (November 7), two juveniles, aged 14 and 11, were convicted at court for causing injury to the hedgehog on Hayton Close in Sunderland, along with four other wildlife offences.

They both pleaded guilty to all five offences at South Tyneside Magistrates’ Court and were referred to the youth offending team.

Faye Vass, Chief Executive at the British Hedgehog Preservation Society, said: "We would like to thank PC Baker for his hard work in securing these convictions. Hearing about the despicable acts carried out by the two boys was truly sickening.

"We are pleased to use some of the reward money offered to help educate children in the area about hedgehogs and how they should be treated. As well as the pods, each school has received a BHPS Education Pack for future projects."