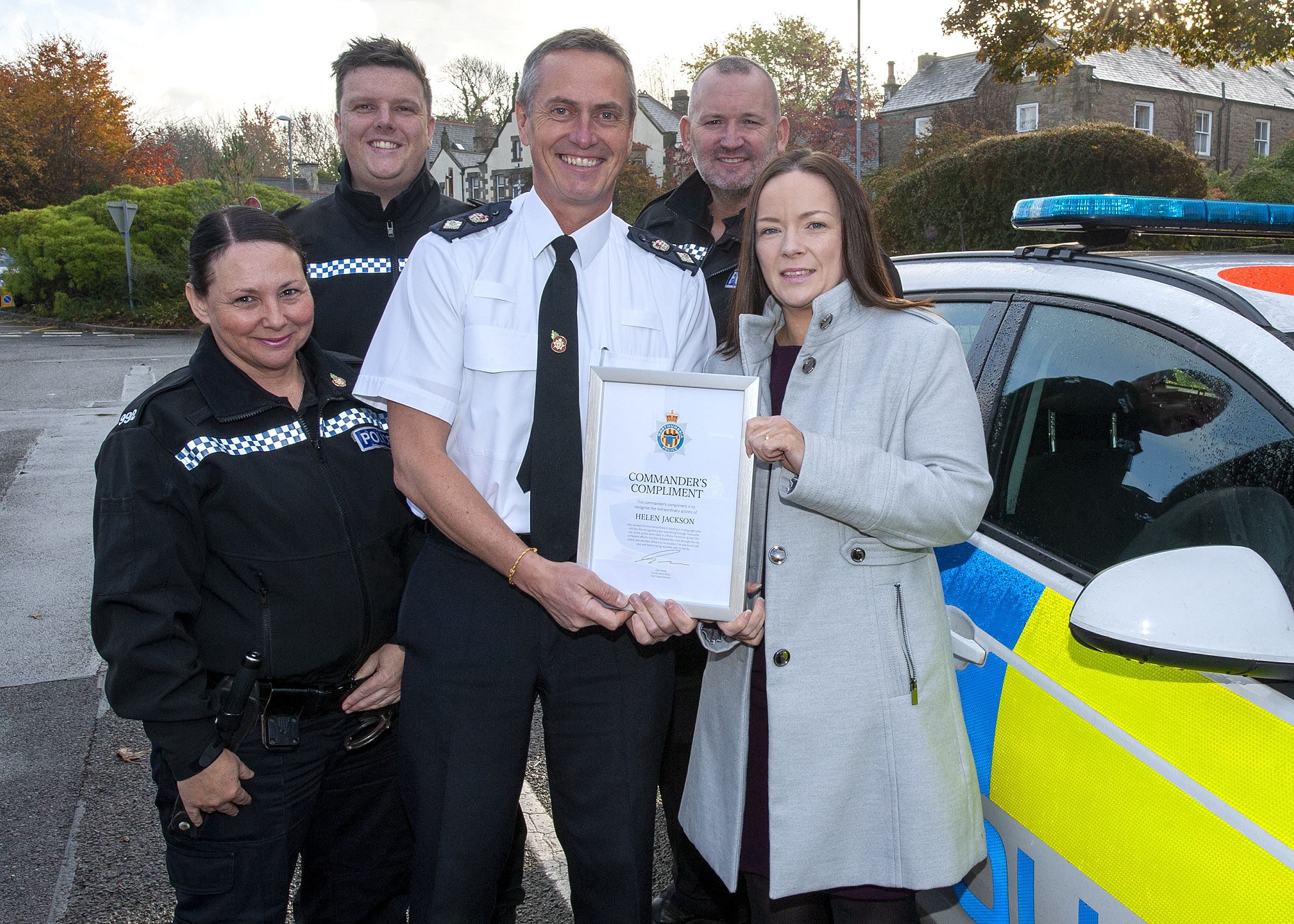 A mother-of-two has been hailed a "community hero" by police after she helped them reunite a missing schoolboy with his worried family.

Last Tuesday (October 29) a huge search operation was launched after Northumbria Police received a report that an eight-year-old boy had gone missing.

The schoolboy had been with his grandparents at the Aldi supermarket in Dunston when he went missing at about 3.10pm.

Dozens of police officers, a police helicopter and police dogs were scrambled to the area to trace his whereabouts.

A public appeal, including his picture, was also circulated on social media in a bid to bring the schoolboy home.

But it was mother-of-two Helen Jackson who eventually saved the day after spotting the missing eight-year-old more than three miles away.

She was walking on Stowell Street in Newcastle city centre when she spotted the child and immediately dialled 999 to inform police.

Helen, 39, who had just finished work at Aspers Casino, then followed the boy through the city until police arrived to reunite him with his relieved family.

Yesterday (Tuesday) the community hero was invited in to Whickham Police Station where she was presented with a certificate of thanks by Chief Superintendent Ged Noble.

She said: "I had literally just seen the post and got to the end of Stowell Street when I saw him wandering along the path.

“It was quite obvious he was lost. He looked out of place, he looked quite young and when he saw me looking at him he ran away. That’s when I called police.

“When I was told he had been reunited with his family I cried, I was over the moon and I think that is when it hit me. I was just so relieved.

“People have been messaging me saying I could have saved his life but I think anyone would have done it.

“I have an eight-year-old son myself and I just thought ‘that could be my little boy’. If it was my kid I would hope someone would do the same thing.”

Ch Supt Noble, Central Area Commander at Northumbria Police, added: "It was fantastic to meet Helen and thank her in person for what she did to help bring this lad home safely.

"She recognised him from our public appeal, contacted police but then had the sense to remain with the child and not let him out of her sight.

"Helen went above and beyond and the result was that a young boy was returned to a family who were out of their minds with worry - she is a true community hero.

"It fills me with pride to know that we have people like Helen who will go to extraordinary lengths to support the police and help us to keep our communities safe."

Following the boy's safe return to his family, his grandmother attended Whickham Police Station to thank the officers who helped bring him home.

She dropped off biscuits and a letter thanking the officers for their “amazing” response to her call for help.

The letter read: "The terror I felt when I realised that he was gone was unimaginable.

"The speed at which everything was co-ordinated and implemented was staggering, although obviously I wasn't really aware of just how quickly officers were acting.

"My undying thanks go to Sergeant Warren Sturrock, PC Dawn Brodie, PC Ryan Mark and each and every police officer who dropped everything to search for my grandson.

"You are all heroes, and despite all the funding cuts, pulled out every resource at your disposal. I thank you and bless you all. You are truly amazing, and a brilliant and caring force."

Ch Supt Noble has also praised the teamwork of officers during the search and said the response should reassure the public.

He said: "It was lovely for the team to get recognition for their hard work and the most important thing is we found the young lad safe and well.

"We work really well as a team and officers from across different stations and departments came together as part of the search effort.

"I hope our quick response to this incident reassures the public that we will pull out all the stops to locate a vulnerable missing person."