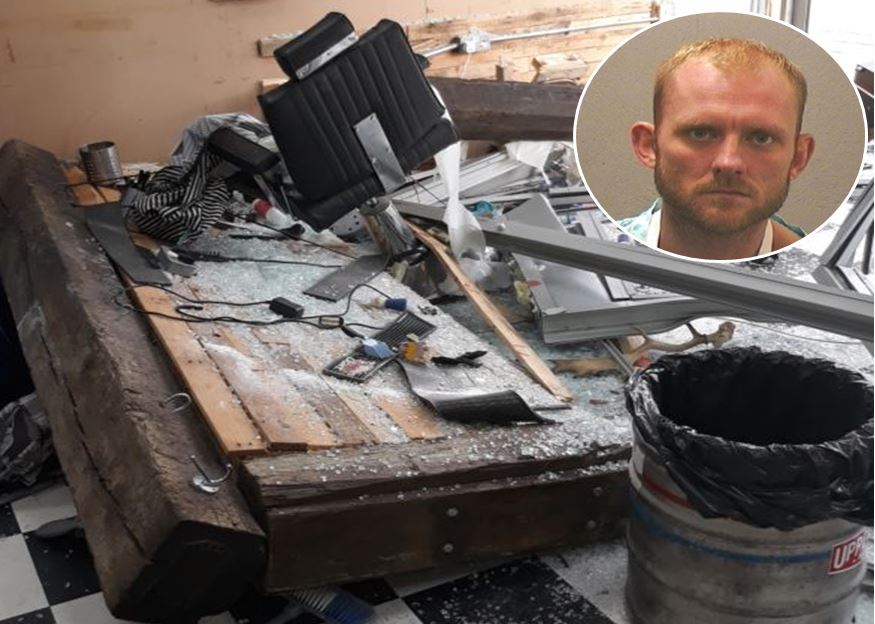 Gilby, 31, caused significant damage as he drove his car through the front of the Tan Solo shop in Sunderland earlier this year

A dangerous driver has been jailed after smashing his car through the front of a tanning salon – narrowly missing a teenage boy.

Blaine Gilby, 31, left a trail of destruction as he drove his Volvo through the front of the Tan Solo shop in Sunderland in August this year.

A 15-year-old boy, who was getting his hair cut at the time, was knocked out of his seat as a result of the smash and narrowly avoided serious injury.

An incensed Gilby then brandished a metal pole and threatened a staff member inside the shop before fleeing the scene and abandoning his smashed-up vehicle.

He continued to act aggressively when arrested by police and spat at an on-duty officer.

Gilby pleaded guilty to dangerous driving, threatening another with an offensive weapon, assault on an emergency worker, damaging property and assault at Newcastle Crown Court on September 13.

Yesterday (Thursday) he was back in the dock as a judge jailed him for 14 months and gave him a 19-month driving ban.

Detective Sergeant Andy Richardson, of Northumbria Police’s Southern CID, said: “The pictures of the damage speak for themselves. Blaine Gilby is incredibly fortunate that his erratic actions behind the wheel did not result in serious injury or even a fatality.

“By smashing his car through the window of a busy business premises, he showed a total disregard for the livelihoods of those working inside the shop, members of the public and the law.

“As a direct result of his actions, a 15-year-old boy was knocked from his chair and suffered a head wound that required hospital treatment. Had somebody been standing in the waiting area, they are almost certain to have suffered more severe injuries.

“Gilby’s behaviour was totally unacceptable and his aggressive behaviour in threatening a member of staff with a metal bar and spitting at a police officer upon arrest was deplorable.

“He needs to take a long look at himself and must now deal with the consequences of his selfish actions.”

A court was told Gilby abandoned his car in the Villette Path area of the city shortly after the smash, which happened on the morning of August 6 this year.

Upon arrest, he then spat at a police officer and refused to cooperate with detectives throughout interviews.

However, with the weight of evidence against him overwhelming, Gilby, of Hewitt Avenue, Sunderland, admitted five offences including dangerous driving and assault on an emergency worker.

In an impact statement, the 15-year-old boy who suffered minor injuries following the smash said: “The person who did this was completely reckless in his actions and deserves what he gets in court.

“Others could have been seriously hurt. For example, if my dad had been sat waiting for me, he would likely have been hit by the car.

“I can only imagine how this would have affected my parents, should I have been seriously hurt as well.”

On Thursday, Gilby was jailed for 14 months and banned from the roads for 19 months.