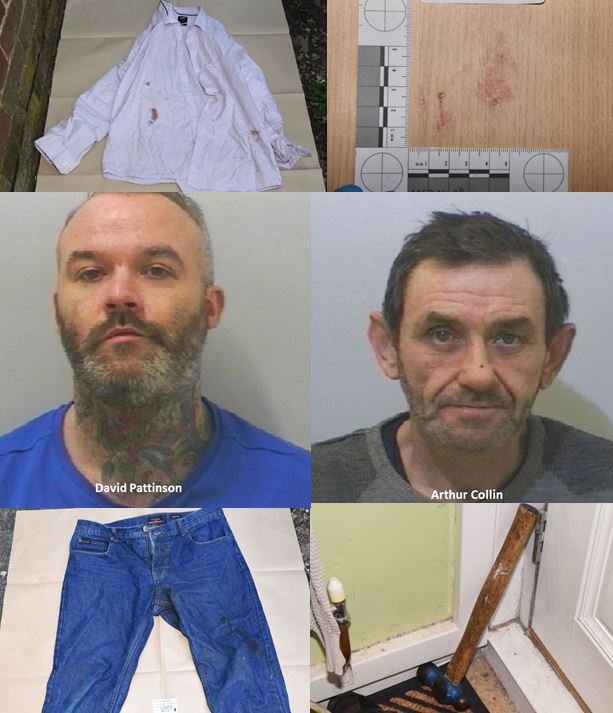 “I had actually given up on my life at that point in the night and accepted I was going to die.”- the words of a victim who was held against his will and tortured before escaping his captors.

In what has been described by one of the officers leading the investigation as one of the worst cases of his career, two thugs who held one of their victims captive and tortured him before he was able to escape have been jailed for a total of 34 years.

David Pattinson, 37, and Arthur Collin, 49, have been branded dangerous criminals by a judge and handed lengthy prison sentences for their violent crimes after appearing at Newcastle Crown Court yesterday (Wednesday).

In April this year, the duo held their 26-year-old victim captive at Pattinson’s home address and subjected him to repeated assaults, including being stabbed and beaten, over the course of 11 hours.

The victim was able to escape when the men attempted to move him to another location and he was able to flee and flag down a passing bus.

In a statement read out in court the victim said: “I had actually given up on my life at that point in the night and accepted I was going to die.

“What makes this whole event worse is the fact Pattinson and Collin have never admitted their guilt and they have made me go to court and relive the whole experience again.”

This incident occurred only three weeks after Pattinson had assaulted another man at his address. The 34-year-old victim feared so much for his own safety that following the assault he fled the address without his shoes on.

Detective Constable Anthony Murray, one of the leading officers on the investigation, said: “I’ve dealt with some particularly nasty and violent cases during my career as a police officer but this has been one of the worst.

“Pattinson and Collin are two incredibly dangerous offenders who are now safely off our streets. However, the physical and mental trauma suffered by the victims will live with them their whole life.

“Hopefully, knowing they are behind bars will bring some comfort to the victims and I want to thank him for his bravery and dedication during this incredibly difficult investigation and trial.”

Pattinson, of Braeside, Berwick, was found guilty by a jury and was sentenced to a total of 20 years for his crimes – 15 years for assault, false imprisonment, threats to kill and possession of class A drugs with intent to supply and five years to run consecutively for the assault three weeks prior.

Collin, of Hurkur Crescent, Eyemouth, Scotland, was found guilty of assault and false imprisonment and was sentenced to a total of 14 years behind bars.

DC Murray added: “Our investigation team are delighted with the result and I want to thank everyone on the team for their hard work on this case.

“I think we all hope we don’t come across another sickening and violent case such as this anytime soon.”