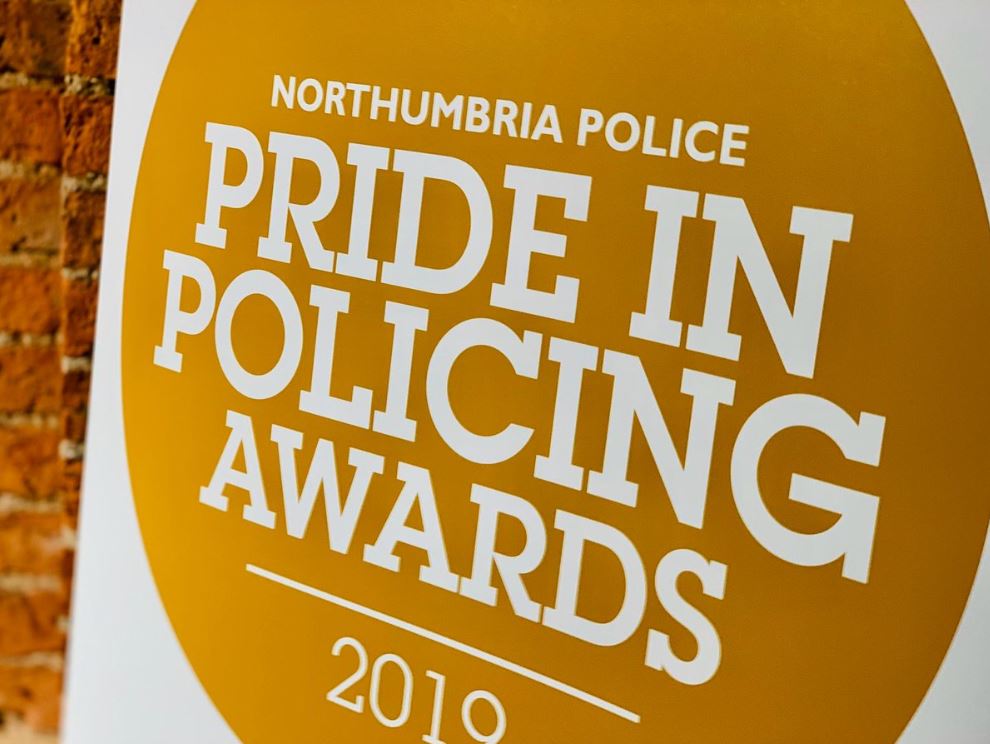 A brave off-duty beat bobby, a top dog with a real nose to catch crooks and a farmer who has dedicated 35 years to volunteering were among those honoured at Northumbria Police’s annual awards ceremony.

The Pride in Policing Awards recognise the outstanding contributions of our officers, staff and volunteers. And this year there was a special category for the Force’s ‘paw-some’ pooches and their handlers – with the winner selected by the public and saw a staggering 37,000 votes cast!

And your top dog was PD Max who, alongside handler PC Adam Fegan, stopped a dangerous driver in their tracks after he had led officers on a pursuit.

The new award was launched to recognise the bravery of our police dogs after the introduction of Finn’s Law. The law is named after a police dog who was stabbed while protecting his handler PC Dave Wardell and a special video message from the duo was played on the evening.

In total, 12 awards where handed out last night (Thursday) during the ceremony held at the Biscuit Factory in Ouseburn and hosted by BBC Look North’s Jeff Brown.

The Award for Outstanding Bravery was won by PC Tracy Cook, who when off-duty apprehended a suspected motorbike thief while two others threatened her with ammonia. Throughout this terrifying ordeal, Tracy held on to the suspect until colleagues arrived.The Trauma Incident Management Team (TRiM) took home the Amazing Place to Work Award. This incredible team support colleagues in need and giving people the opportunity to speak openly and honestly about their experiences around trauma and mental health.

Meanwhile, Det Con Beverly Meikle and PC Olivia Scorer were awarded the Protecting the Vulnerable honour for their work with an assault victim who was scared to prosecute. They built a rapport with her, gained her trust and showcased the support network available. Thanks to their endeavours, she agreed to support a police prosecution, resulting in the offender being jailed for more than eight years.

The amazing contribution volunteers make to the Force and our region was also recognised, and there is no-one more deserving of an award than farmer Michael Scott who has dedicated 35 years to being a Special Constable. In this role, he has saved a man’s life, stopped a raging bull and helped catch criminals looking to exploit rural communities.

Chief Constable Winton Keenen said: “I am continually overwhelmed by the selfless actions and dedication of those who proudly represent the Force.

“Officers, staff and volunteers go above and beyond on a daily basis as they look to provide the very best service they can to the communities we serve.

“I know they don’t do this for recognition, but it is always an honour to be able to be able to reflect, recognise and showcase the outstanding contributions they make.

“All winners and nominees should feel exceptionally proud of their achievements."

“It is also important to recognise the actions of those who have won awards reflect the efforts being made across the whole force area as we look to meet the demands of modern-day policing.”

He added: “I also want to take this opportunity to say a big thank you to everyone who took the time to vote for our police dog of the year winner.

“This category clearly caught the public’s imagination and for me also highlights the ongoing support we receive from the fantastic communities here in the North East.”

Chief Constable Keenen also thanked all of the sponsors who had helped to make the night possible.

“Whilst policing continues to present growing demands and new challenges, it’s been truly humbling to recognise the fantastic achievements of our police officers, staff and volunteers who serve the public day in, day out.

“There really is some great work happening throughout the Force and these awards highlight that. I’m full of admiration for every nominee, particularly those that picked up the awards tonight, and would like to thank the workforce as a whole for making a difference every single day.”

Guests were also joined by Pudsey Bear who made an appearance to help raise money for Children In Need.

The full list of Pride in Policing Awards winners are: