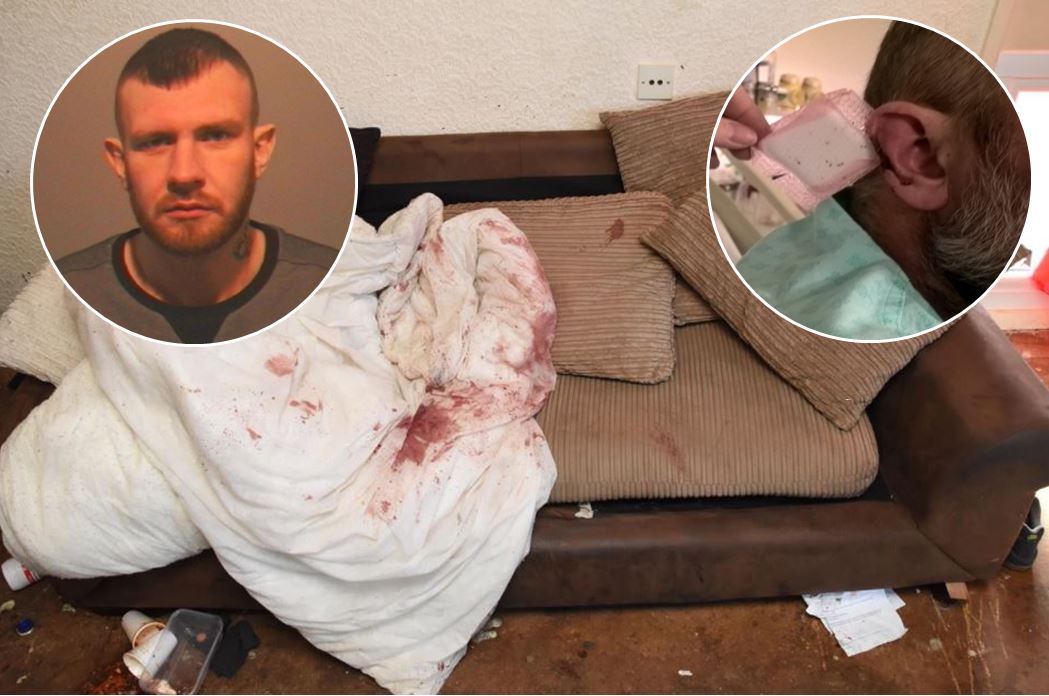 A drunken thug has been jailed after a vulnerable victim had his ear bitten off in a brutal and sustained assault.

Bradley Topp has been put behind bars for eight years for carrying out the violent assault on his 40-year-old victim in the early hours of February 11 this year.

A court was told how Topp, 28, had brutally beaten the man in his own home after he and his friends were invited inside the flat on Barford Court in Gateshead.

The group had been drinking and taking drugs but suddenly the violent thug launched a brutal attack on the occupant of the address.

Topp was filmed by his friends delivering punches to the face of his bloodied victim. The man had already had part of his ear bitten off during the assault.

The brute left the man in a pool of his own blood inside the flat before the victim's partner discovered him and contacted police.

He was placed into an induced coma by doctors and was left fighting for his life in intensive care for four days before waking up.

Topp was arrested hours after the savage attack and later charged with wounding with intent to commit grievous bodily harm.

And on Monday the thug was jailed for eight years after pleading guilty to the offence at a previous hearing.
In a victim impact statement read out in court, Topp’s victim said he had been unable to sleep as he "could have died" in the brutal attack.

The 40-year-old said: "This has affected me, when I go out I am watching as I don’t want to be assaulted again.

"I have not been able to sleep. I was being friendly letting people stay in the flat and they have repaid me by attacking me.

"The injuries I suffered left me in intensive care for four days on a ventilator and I realise I could have died if my partner had not have kicked the door in."

She said: "I am delighted with the lengthy custodial sentence handed to Bradley Topp and I know the victim in this case is too.

"This was a sustained attack on a man inside his own home and when it had come to an end, Topp left his victim there to die.

"Thankfully the victim has been able to make a full recovery but he has been left scarred for life with part of his ear missing.

"The physical injuries have since healed but this would be a traumatising incident for anyone and I know it has deeply affected him.

"I hope he can take comfort from knowing that this violent and dangerous offender is behind bars and cannot do him any further harm.

"The streets are safer with Bradley Topp in prison and I hope this sentence reassures the public about our commitment to putting violent offenders before the courts."

A second man, aged 33, had also been arrested in connection with the attack but died before charges were brought in the case. It could not be proved which of the men was responsible for biting off the victim’s ear.

Topp, of no fixed abode, was jailed at Newcastle Crown Court on Monday (October 28).