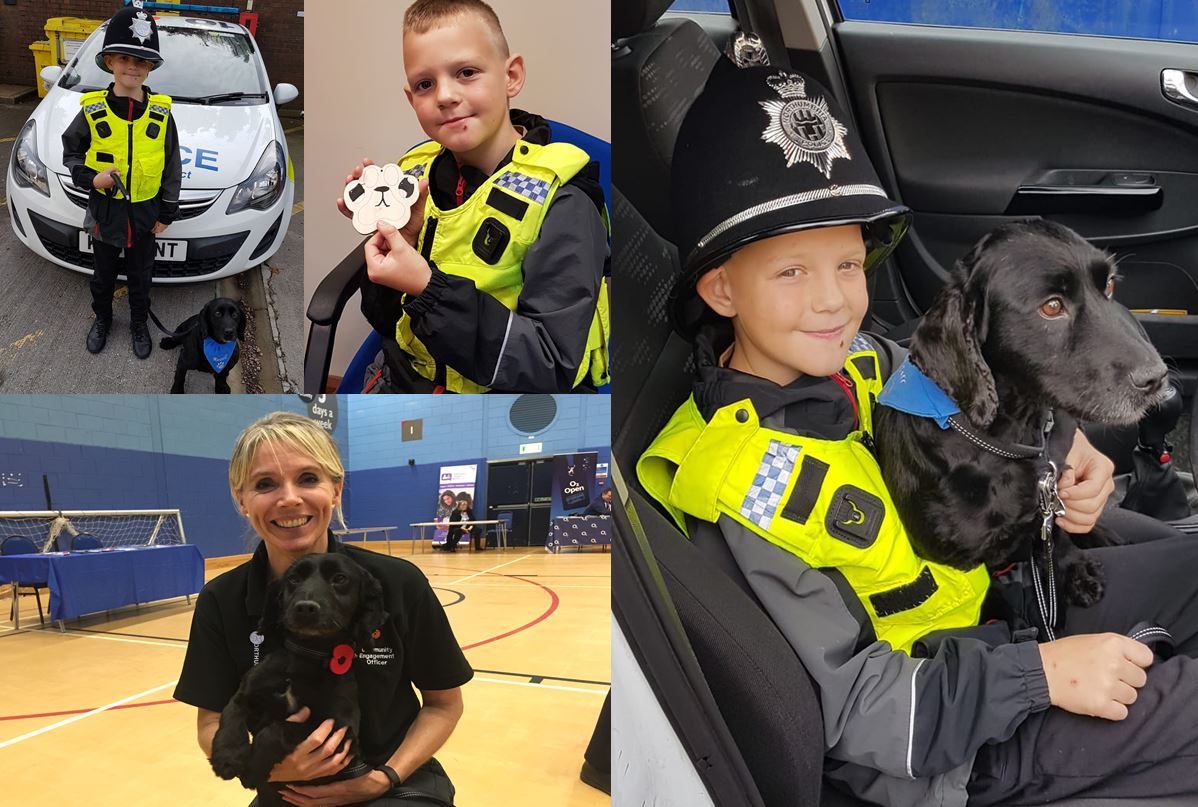 A budding young cop was given a day to remember as police rewarded him for his good behaviour.

Nine-year-old Bobby met PC Sally College and community engagement dog Russell for the first time in April and then again in July when they visited The Link School in Sunderland to chat to pupils.

So PC College promised the Castletown youngster, who hopes to be a police officer when he’s older, that he would be rewarded if he continued to show good behaviour at school and at home.

On Saturday, she kept that promise as Bobby and his mum Simone Newby were invited into Millbank Police Station in South Shields for a trip to remember.

“He absolutely loved his day at the police station,” Simone said. “Bobby has not stopped smiling since and has been telling everybody he meets about his trip out.

“He met PC College and Russell a few weeks ago when they visited him at school, and you could tell that he was blown away by it.

“So it was incredibly kind of PC College to offer for Bobby to come into the station, sit in a police vehicle and pull on the uniform as a reward for his recent good behaviour.

“He certainly won’t forget it in a hurry – that’s for sure!”

PC College, who works with the Community Engagement Team in Sunderland and South Shields, regularly visits schools and youth community groups across the region to talk about the importance of good behaviour, crime prevention and how to stay safe.

And she often takes her four-legged friend Russell along with her to help reach out to youngsters.

“Russell retired from the Dog Section as an explosive detection dog last year and we decided to make him a member of the community engagement team,” PC College said.

“We work with a diverse group of people and groups across Southern Area Command, and there are many members of our communities who sometimes find it hard to talk to police officers. The introduction of Russell has helped us speak to and build relationships with those individuals.

“Russell has proven to be incredibly popular over the last year, as you can imagine, and he loves being out in the community and getting a few extra strokes.

“It was great to see Bobby interact so nicely with Russell, so we thought it would be nice to invite him and his mum into the station to reward him for his good behaviour – hopefully he had a day to remember.”

As an operational search dog for eight years at Northumbria Police, Russell was regularly spotted at local events such as the Sunderland Airshow and football stadiums including the Stadium of Light and St James’ Park.

He also used his nose to search venues further away from home, including the Royal Albert Hall in the lead-up to the Queen’s 90th birthday celebrations and the London 2012 Olympic Park.