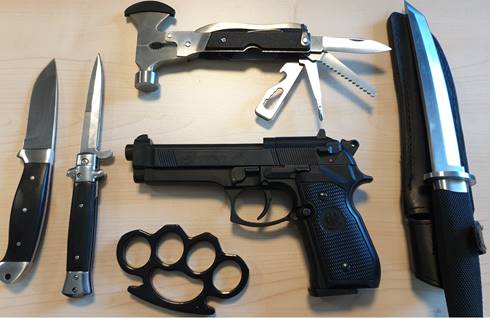 Officers have seized a total of 30 prohibited weapons destined for addresses across the North East as part of an ongoing operation with the UK Border Force Agency.

Last month, officers from the North East Regional Special Operations Unit (NERSOU) were notified of 30 weapons intercepted at our ports by UK Border Force staff as part of Operation Avert.

Officers visited a 47-year-old man at his home in South Shields after ordering a flick knife online. While in attendance, police found a cannabis bush and resin, four gas-powered pellet pistols, a gas-powered pellet rifle, a large hunting knife, and nunchucks – all were all surrendered.

Another man, aged 26, from Bishop Auckland was also visited by officers after buying a butterfly knife online. Knuckledusters and a Swiss army knife were also taken into police possession.

A representative from NERSOU’s disruption team said: “Just because something is for sale online in another country, it does not mean that it is legal to have here in the UK.

“Our officers will continue to work with the UK Border Force as part of Operation Avert, our ongoing initiative to identify prohibited items being imported in to the UK from abroad.

“We know that some knives and weapons are legal to own and we are not forcing people to surrender these, however many people chose to do so after speaking with our officers.

“The purpose of these visits is simply to seize dangerous weapons which have been brought into the country illegally and to offer people advice on what the law states with regards to buying items from overseas and make sure we prevent any unnecessary harm being caused.”

The repercussions of buying prohibited weapons online could range from advice to prosecution and potentially imprisonment.