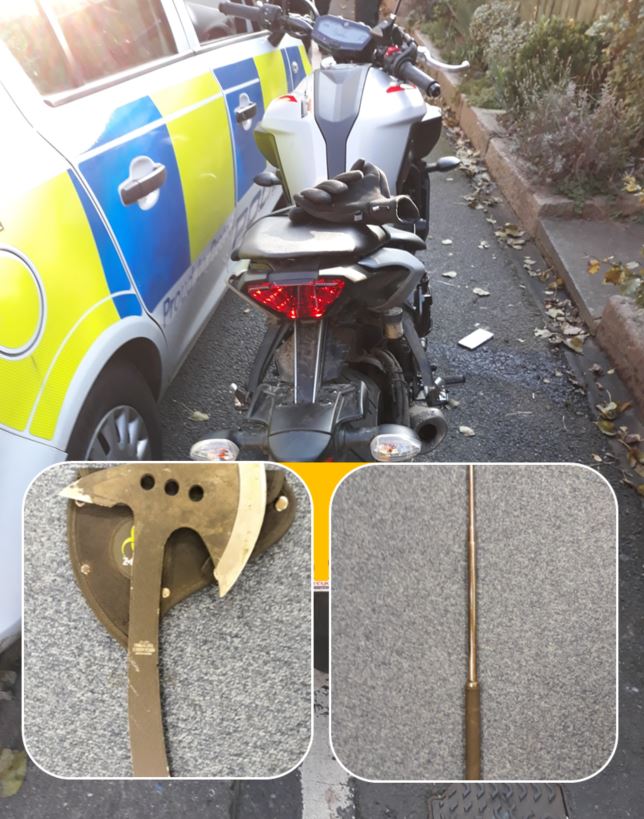 Weapons, cash and a stolen bike have been seized after a suspected teenage thief was arrested by police.

Northumbria Police’s Operation Benelli made the seizures after arresting a 17-year-old boy in the Byker area of Newcastle.

It followed a report that a Yamaha MT-07 bike worth £8,000 had been stolen from an address on Brighton Grove in Arthur’s Hill on Monday, October 14.

The bike had been spotted by officers being ridden in Byker and Heaton so Operation Benelli launched a plain-clothed operation locate it.

Covert officers spent hours monitoring the vehicle before swooping into action on Brinkburn Street in Byker on Wednesday afternoon.

The 17-year-old suspect abandoned the bike and attempted to flee the scene on foot but he was caught and arrested by fleet-footed officers.

Enquiries then led police to his home address in Byker where they seized an axe, baton and more than £2,000 in cash.

The vehicle has now been returned to its owner and officers have welcomed yet another success for the specialist motorcycle theft task-force.

Detective Constable Jorden Atkinson, of the Op Benelli team, said: “This is another good result for the team but most importantly we have returned a stolen bike to its owner.

“It was a good piece of work by officers on the ground who were supported by neighbourhood officers from Byker Police Station during the pursuit of the suspect.

“We are hot on the heels of offenders and the word has got out that the Operation Benelli team won’t tolerate this type of offending.

“It is concerning for us that the offenders are predominantly teenagers but they are committing serious offences and we won’t hesitate to arrest them.

“We have seized a number of weapons and more than £2,000 in cash at the home of a 17-year-old boy and that is not acceptable.

“Our team will continue to work with partner agencies to put preventative measures in place and to engage with young people at schools and colleges.

“However, we cannot let this type of offending to go unchecked and if you know people committing this type of crime then we need you to get in touch.”

The 17-year-old has been released on bail pending further enquiries by the specialist motorcycle task-force.

Operation Benelli were set up after a spike in offending that saw teams of thieves stealing motorcycles from across the Force area.

Most of the offending was opportunistic with motorcycles being stolen from car parks but there have been some reports of thieves committing violent robberies.

Victims are also spoken to in a bid to build up an intelligence picture of those involved in the disorder and targeted enforcement activity will then take place.