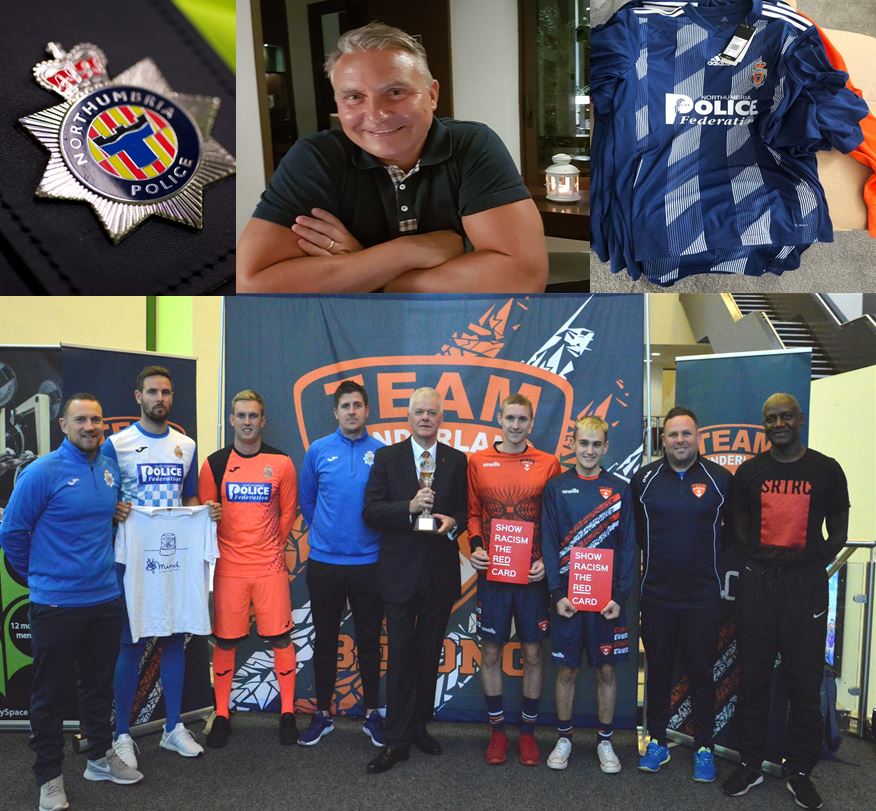 Police officers and staff will pull on their football boots next week in memory of a “gentle giant” who recently passed away.

Northumbria Police will take part in a charity football match against the University of Sunderland to honour the late Detective Constable Cameron Scarratt, 44, who sadly died on July 3 following a short battle with cancer.

To ensure Cameron’s legacy lives on, his friends from the Force’s men’s football team have teamed up with the University of Sunderland – where he used to study – and organised a special fixture in his memory.

The teams will go head-to-head for The Cameron Scarratt Trophy on Monday (October 21) from 7.30pm at the Nissan Sports & Leisure Complex, on Washington Road, Sunderland.

Cameron’s wife, Lisa, will be among those in attendance along with sons Charlie, 11, and Harvey, 8.

“He would have been absolutely over the moon,” Lisa, 45, said.

“It came as a total surprise to the family but it’s such a lovely and thoughtful thing to do and the night will incorporate Cameron’s love for football, his 20 years’ service with the Force and his time at the University of Sunderland.

“Cameron was a wonderful person - funny, he had a very dry sense of humour and was a very sociable guy. He was a gentle giant, somebody who quite simply loved his life, his family and all those around him.

“It’s going to be an emotional night, and we hope it can raise money for fantastic causes.

“I’d also like to take this opportunity to thank Macmillan Cancer Care and all the staff on Ward B28 at Sunderland Royal Hospital who provided such wonderful care and support to Cameron and the whole family.”

Proceeds raised at the event – which is free to attend - will go towards Macmillan Cancer Support, Mind North East, the Blue Light Foundation, and Show Racism the Red Card.

A raffle will be held on the night with a range of prizes that have been donated by local organisations including Sunderland AFC, The Rabbit Sunderland and Sunderland Honda.

A number of other organisations have shown their support for the match, including Northumbria Police Federation, Northumbria LGBT+ Association, Total Sport North East and Let the fun be FIN.

Officers will also be on hand to chat to any members of the public who are interested in volunteering or joining the Force.

Superintendent Brad Howe, of Northumbria Police, said: “Cameron was a well-liked and much-loved colleague who served as a Detective Constable in the Priority & Organised Crime Team when he became poorly.

“After speaking with the university, we thought it would be only right to dedicate the game in Cameron’s memory and it’s wonderful to have Lisa and Cameron’s two children coming along on the night.

“We are all looking forward to the event and hope it will be an unforgettable occasion as the whole community comes together to remember Cameron and raise money for some fantastic causes in the process.”

The game will be attended by a number of special guests, including Black Cats legend Gary Bennett, Southern Area Commander Chief Superintendent Sarah Pitt and Vice-Chancellor of the University of Sunderland, Sir David Bell.

Lee Bratton, president of football at the University of Sunderland, said: “This event is a fantastic chance for the university and the community to join together and do something good for charity.”