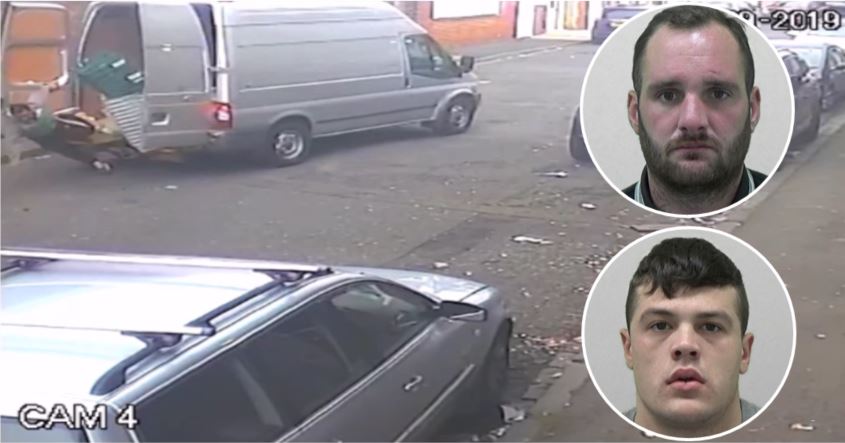 A pair of thoughtless thieves who stole a van used by volunteers to deliver food to the poor have been jailed.

Lewis Wood, 21, and Mark Scott, 30, are today behind bars after admitting to stealing the vehicle as kind-hearted volunteers delivered food parcels to those in need.

The KC Foundation, a local charity based in Byker who run the Connect25 Food Bank, crowd-funded thousands of pounds to purchase the van in September.

But they were left devastated when the van was targeted by the thieves during a parcel drop on New Bridge Street – just two days after they had bought it.

On September 30 a volunteer was in the back of the van unloading food onto a trolley when the men jumped into the front of the vehicle and drove it away.

The 35-year-old man was flung from the back of the van but thankfully he was not seriously injured in the fall.

Police were called and launched an investigation, and volunteers hoped the van would be tracked down, but sadly it was found burnt out in Throckley a week later.

Officers were able to seize CCTV from the scene of the theft and eventually identified Wood and Scott as those responsible.

They were arrested, charged and now they have both been convicted of taking a motor vehicle without consent at Bedlington Magistrates' Court.

Following the case, investigating officer Detective Constable Simon Wardle welcomed the sentences and condemned the actions of the thieves.

He said: "I am glad that the court has deemed this offending serious enough to warrant immediate custodial sentences.

"This is a despicable offence where two men have targeted a vehicle belonging to a charity that dedicates itself to supporting the local community.

"They raised funds to buy the van so they could deliver food parcels to those in need and those men were well aware of that.

"Not only have they robbed the charity of the vehicle but they could have caused serious injuries to the volunteer who was in the back of the van at the time.

"Thankfully he has been able to walk away with minor injuries but that will come as no comfort to him or his other volunteers at the charity.

"I hope the fact that these men have been jailed reassures the charity that Northumbria Police are committed to tackling this type of offending.

"They are a fantastic community and have done some amazing work in the Byker area. I hope this mindless theft doesn't deter them from continuing that good work."

The KC Foundation was set up by The King Castle Church in Byker so they could support vulnerable people in the area with a number of initiatives, including their mobile food bank.

Bola Oluwatula, project leader at the KC Foundation, said volunteers had been left devastated by the theft and that it had robbed vulnerable people of the service.

She said: “We had a van initially but that was written off and so we used the insurance money from that and some crowd-funding to make up the rest.

“We deliver food parcels to the local community and we hoped the new van would increase the number of people we could deliver to.

“But two days after we got the van this happened and that had a massive impact on the work we were doing to provide for these vulnerable people.

“It also had a big impact on our volunteers who were worried about being targeted by criminals and that means we can’t deliver as much as we want to.”

Bola added: “As a church we saw that there was a need for this kind of service as we had seen too many people in poverty and seen people taking food out of bins.

“The van cost just under £6,000 and it would be a big challenge to raise that kind of money again as we are not funded and raise money exclusively through donations.

“We had hoped the van would be found but now we are just back to the drawing board.”

Mark Scott, of Bensham Avenue, Bensham, was jailed for eight weeks on Friday at the same court. He was also handed a one-year driving ban.

You can offer your support to the charity by visiting www.thekcfoundation.co.uk/ or searching Connect25Foodbank on Facebook.