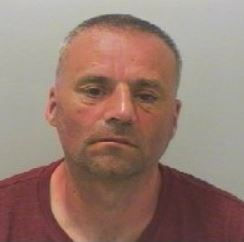 Stephen Clazie, 48, has been sentenced to a total of 12 months behind bars after breaching both his criminal behaviour order and restraining order.

Officers and residents in Berwick have been dealing with Clazie and his disorderly actions for a number of months and now a judge has ruled in their favour.

Northumbria Police’s Neighbourhood Sergeant Alan Bogle, an officer in Berwick, said how important this sentence was to the community and the victim.

He said: “This should reassure victims how robustly we take action against those who breach court orders.

"He has been a reoccurring issue for the community and we have worked tirelessly to bring him before a judge and get an outcome the residents in Berwick deserve.

“This type of behaviour will not be tolerated in our communities and we are here to make sure measures are taken to protect and safeguard residents.”

Clazie, of Main Street, Berwick, appeared at South East Northumberland Magistrates’ Court on August 28 and was also ordered to pay a surcharge to fund victim services of £122.00.