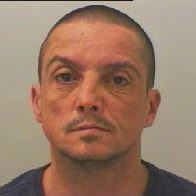 The 18-year-old victim was left with bruising to her arms after Williamson grabbed her in a headlock during an argument on Monday, August 18. The woman, who was 13 weeks pregnant at the time, managed to free herself from Williamson but was left in a distressed state and concerned for her unborn baby.

On August 21, Williamson was sentenced to 12 weeks behind bars and given a 10-year restraining order after pleading guilty to common assault and battery.

The victim said: "The relationship with Mark can be categorised as abusive and turbulent.

"I am currently 16 weeks pregnant at the moment and I believe my pregnancy is the reason that I am now strong enough to give a statement and go to court.

"I felt trapped and like I was unwanted because he had this hold over me."

PC Rosie Morrison who investigated the case praised the bravery of the victim for reporting the incident to police and encourages others who may be in a volatile relationship to speak out.

PC Morrison said: "This has been a really frightening incident for the victim who is still in the early stages of pregnancy. She has bravely spoken out against Williamson and by doing so, he is now facing the consequences of his actions behind bars.

"He has also been handed a ten-year restraining order which means he is also unable to contact the victim upon his release from prison.

"I think it's really important that anyone who is in a violent relationship talk to someone they trust. This doesn't have to be police – it could be a friend, a colleague, a social worker, a charity worker or domestic abuse support services.

"If you also have concerns about a current partner, or a new relationship, you can submit a Clare's Law application – also known as a Domestic Violence Disclosure Scheme – where police can disclose information about a partner should they have a violent history that you need to be aware of."