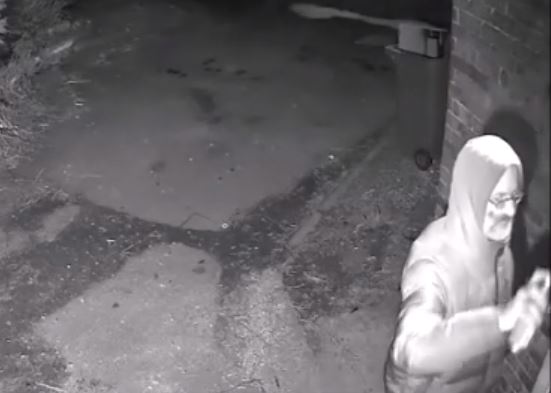 Michael Parsons, 55, was hit with the fine after he appeared at court in South Tyneside last week to admit the criminal damage.

On January 16 this year police received a report that homophobic slurs had been spray painted on a garage door on Lane Head in Ryton.

Officers identified Parsons from CCTV footage in the back lane in which the man could be clearly seen committing the offence.

He was arrested but claimed he had just had foot surgery and required the use of crutches so could not have been responsible.

But the vandal was left red-faced when police showed him CCTV of him leaving a nearby supermarket without his crutches.

The 55-year-old had entered the store with them on his arms but accidentally left them in the shop before leaving unaided.

After being confronted with the footage, Parsons, of Greenfields, Ryton, pleaded guilty to one count of criminal damage.

He was handed a conditional discharge at South Tyneside Magistrates' Court on August 29 but was made to pay £140 because of the homophobic nature of the graffiti.

Following the case, investigating officer PC Ferenc Szilvasi slammed Parsons behaviour and said he had shown no remorse when questioned by police.

He said: "This mindless vandalism left the victim with significant damage to her door but it was the nature of the graffiti that was so upsetting.

"She was very distressed to be targeted by this vandal and I am glad that we have been able to get her a result at court.

"This type of behaviour is completely unacceptable and I want people to know that we will take action against offenders.

"He is a prolific criminal who showed absolutely no remorse and tried to claim that the person in the footage could not be him.

"The only reason he admitted the offence was because of the overwhelming evidence against him and I am glad we have secured a conviction.

"Magistrates ordered Parsons to pay the money he did because this was recorded as a hate crime and I hope that reassures victims.

"Being you is not a crime and nobody should be targeted for who they are. If you have been a victim of hate crime then please get in touch."

A crime is considered to be a hate crime if someone has been targeted because of who they are their race, faith, religion, disability, gender identity, age and sexual orientation.

You can do this by calling police on 101 or by filling in an online reporting form at the Northumbria Police website.