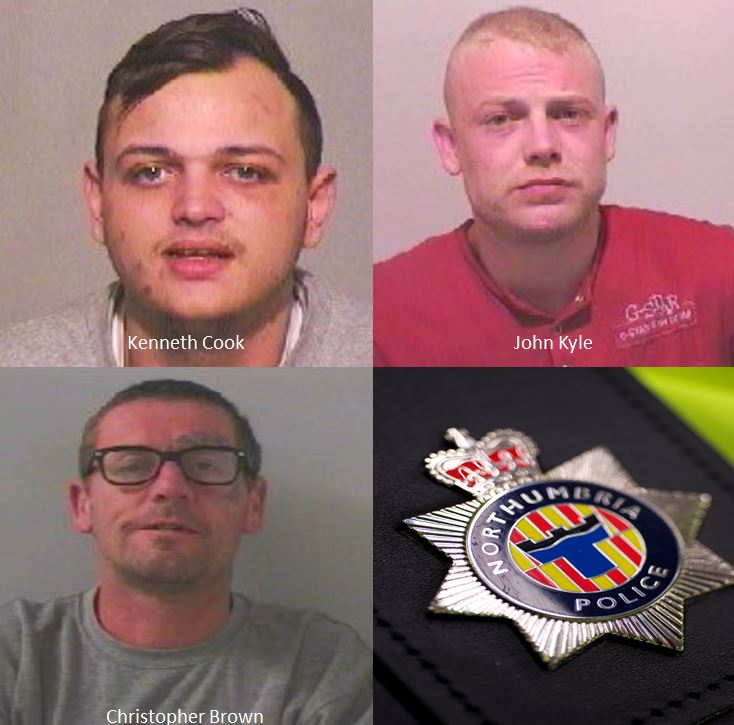 Kenneth Cook, John Kyle and Christopher Brown were all convicted for their roles following the incident in South Shields last summer

Three blackmailers have been jailed for a total of 29 years after a woman was snatched off the streets and a £2,000 ransom demand made to her boyfriend.

The woman was subjected to the terrifying ordeal in June last year after she was kidnapped by strangers as she walked with her partner in South Shields.

Her captors threatened to cut her throat and send a gruesome image to her boyfriend unless he paid them a four-figure sum.

The victim – who suffered a broken breastbone as a result of the violence used against her – was later dumped from the car in Hebburn five miles from where she was taken.

Kenneth Cook, John Kyle and Christopher Brown were all convicted for their roles following a trial at Newcastle Crown Court in May.

On Friday (August 30), the trio were back in the dock and each received custodial sentences.

Detective Constable Julie Jackson, of Northumbria Police, said: “First and foremost, I would like to thank the victim of this despicable crime for their incredible bravery and cooperation shown throughout this case.

“I’ve been with Northumbria Police for almost 30 years and this was one of the worst crimes I’ve ever had to investigate. It is difficult to comprehend the terror that the victim was subjected to.

“She was a completely innocent member of the public who was out walking with her boyfriend, minding her own business.

“These three individuals, who she did not know, then bundled her into a car and subjected her to hours of physical and mental abuse. After driving away with her, they then threatened to kill her unless her partner paid them for her release.

“This was a frightening and sinister crime, and we are committed to ensuring dangerous individuals such as these are removed from our streets.

“I hope the defendants’ respective sentences can offer some kind of comfort to the victim and her family, and sends a strong message out to the community – this type of disgraceful behaviour will not be tolerated.”

The court was told the couple visited the One Stop shop on Whiteleas Way, South Shields, on the evening of June 11 last year and Kyle slammed the door on them as they were trying to leave.

As the victim and her boyfriend later walked towards their home, a black Vauxhall repeatedly drove past the pair and they were later confronted by the group.

The man, who gave his girlfriend the shopping bags and urged her to get to safety, was then chased by the gang but managed to get away.

However, the female victim encountered the vehicle again shortly after and was forced into the back seat of the car.

She was then ordered to make several calls to her partner, and when it connected, one of the men warned they would “cut her throat and throw her in the Tyne and send a photo of it” if he did not pay a £2,000 ransom.

The gang then drove the terrified woman to the banks of the River Tyne, where she was attacked by Cook, suffering a broken breastbone.

When the men failed to receive the money they had asked for, they dumped the victim in Hebburn before police managed to locate her.

In a statement read to the court, the female victim said: “Since this incident, I am absolutely terrified. I can’t eat and can’t sleep unless I’ve taken my medication.

“I cry all of the time. Don’t understand why they did this to me – I’ve never hurt anyone.”

Her partner added: “I feel guilty that I couldn’t stop the males doing what they did. I was totally helpless.

“When I was talking to them on the phone and heard she was in the boot, I thought she was going to be killed.

“Since the incident, I have been on a heightened state of alert. I’ve been constantly watching people around me and always sit where I can look at the door. I’m a nervous wreck.”

Cook, 26, of Bensham Bank, Gateshead, pleaded guilty to blackmail and was also convicted by a jury of causing grievous bodily harm with intent and kidnap. He was jailed for 15 years with a four-year extended licence period.

Kyle, 30, of Ribble Walk, Jarrow, denied kidnap and blackmail but was found guilty following a trial. He was jailed for 10 years with a four-year extended licence period.

Brown, 42, of Grosvenor Crescent, Hebburn, was found guilty of blackmail and was jailed for four years.