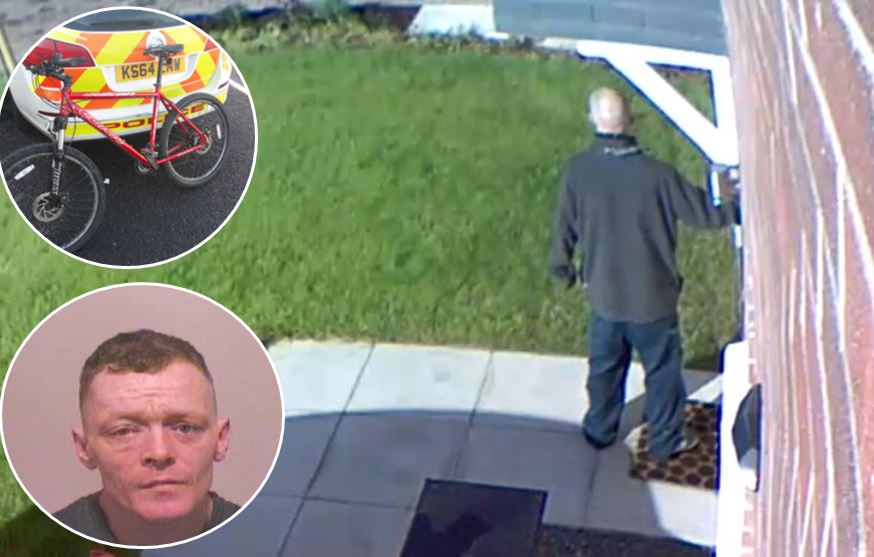 Bates, 37, targeted ten addresses on the estate within an hour on the morning of June 5 this year

A brazen burglar who terrified a new mum after she caught him standing next to her four-week-old baby has been jailed.

Covered in mud and smelling of alcohol, Daniel Bates, 37, targeted almost a dozen houses on the same morning as he prowled around a Houghton-le-Spring estate eyeing a quick win.

The light-fingered thief stole a red Carrera Vulcan mountain bike from a garage of a property on Syston Close, and also entered a house on Greenfield Way with the intention of burgling it.

But Bates was caught in the act as a mother came down the stairs and spotted him standing next to her baby.

The intruder fled empty-handed but went on to try the doors of a number of other houses and vehicles on the same estate.

Bates, of Morley Terrace, Fence Houses, was charged with two counts of burglary and nine counts of attempted burglary.

He pleaded guilty to all 11 offences at Newcastle Crown Court in June this year. On Monday (September 16), he was sentenced to one year behind bars.

“He frightened a number of occupants in a quiet residential area as he went door-to-door looking for valuables which he could steal. He tried the doors of a number of addresses and vehicles in an attempt to get his hands on anything he could.

“He forced his way into one property on Greenfield Way and terrified the occupant, a new mum who was at home with her four-week-old baby, and then made away with a red mountain bike which he stole from a garage of a nearby address.

“As he made away with the bike, he was spotted by a passing officer on patrol. Police were quickly made aware of Bates’ actions earlier that morning and he was swiftly arrested.

“We make no apology for our zero-tolerance approach towards this kind of criminality. Burglary is such an intrusive crime and can have a lasting effect on victims and their families – and we will continue to actively pursue perpetrators and bring them to justice.”

In an impact statement read in court, the mother says she is “still in shock” by the events of that morning.

“I now do not feel safe in my own house,” she said. “My four-week-old baby was next to where the man came in and I was terrified the baby would be harmed.

“I now feel on edge and upset that someone has come into my house without permission. I cannot believe this has happened.

“As soon as I got him out of the house, I took my child upstairs and burst into tears. I am still in shock.”

Det Con Havery is part of the Southern Burglary Team, a dedicated group of detectives who analyse every burglary across Sunderland and South Tyneside and target offenders, as well as try to prevent instances from happening in the first place.