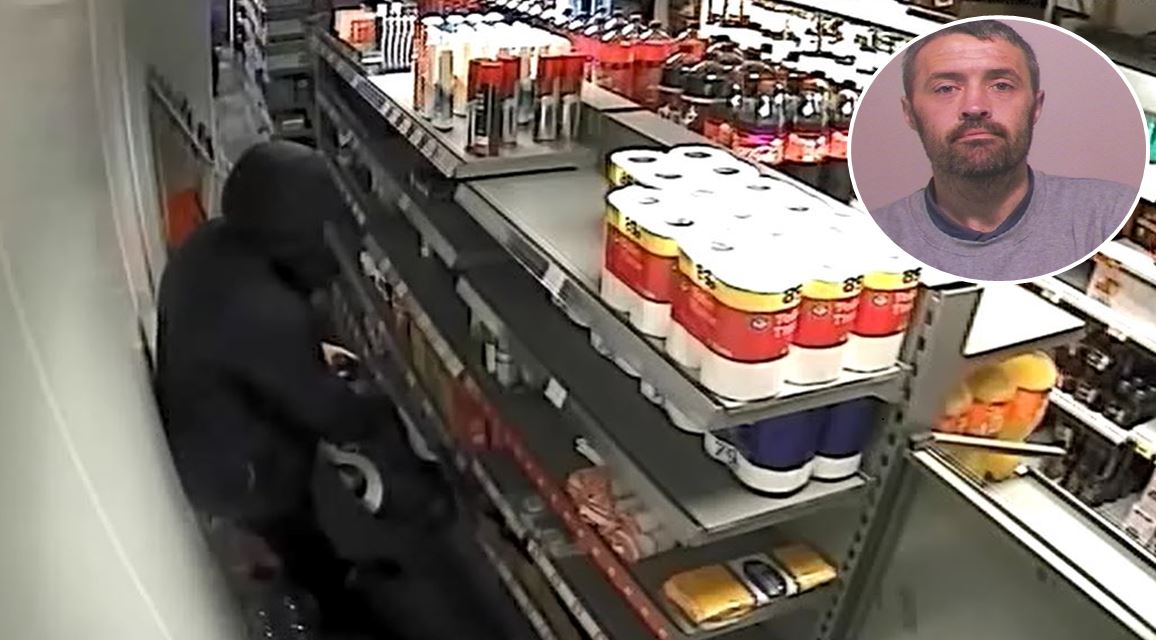 Paul Skidmore, 38, is due to be sentenced later this year after admitting the robbery at the 'Best One' store on Ocean Road, South Shields

A brute who pinned a female shop worker up against the counter during a terrifying robbery faces jail.

Paul Skidmore, 38, stole various bottles of spirits as he raided the ‘Best One’ convenience store on Ocean Road, South Shields, in August.

After a woman in her 60s saw Skidmore placing bottles of alcohol into his bag without paying, she told him to put the items back – which he initially agreed.

But moments later Skidmore forced his way through a ‘staff only’ door and demanded the scared employee to empty the till – before pinning her up against the counter as she attempted to press the panic button.

Police trawled through the store’s CCTV and identified Skidmore, who had been discharged from South Tyneside Hospital hours earlier and was still wearing his hospital tag.

Skidmore, of no fixed abode, pleaded guilty to robbery at a Newcastle Crown Court hearing on September 12. He is due to be sentenced later this year.

Detective Constable David Horsley, of Northumbria Police’s Southern CID, said: “This was an appalling incident that left a 65-year-old who was working at the store absolutely terrified.

“Skidmore showed a total disregard for the welfare of the employee and overpowered her as she desperately tried to call for help. He then left the store having stolen numerous bottles of alcohol.

“Upon arrest, Skidmore refused to cooperate with police and made the victim attempt to pick him out in an identification procedure, which will have caused further distress and anguish.

“This type of behaviour is totally unacceptable and we are committed to ensuring those who prey on others and threaten the fabric of our communities are taken off the streets and dealt with robustly.

“I would like to thank the victim in this case for her bravery and cooperation, and reassure the community that this type of criminality will not be tolerated. Skidmore must now deal with the consequences of his selfish actions.”

The female employee was uninjured but admitted she was in “still in shock” when officers arrived at the store following the robbery.

After scanning the store’s CCTV, police identified Skidmore and carried out further enquiries at South Tyneside Hospital, where the defendant had been discharged just hours prior to the offence.

He is due to be sentenced on November 1.