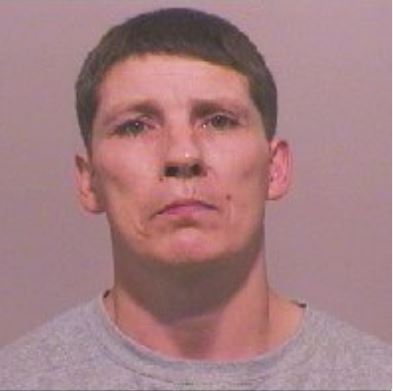 A prolific criminal who hurled tiles and bricks from a roof during a six-hour police stand-off has been jailed.

Leslie Podd, 42, climbed on top of the three-storey Manor House building in Easington Lane on the afternoon of October 31 last year.

With a crowd gathering on the street, Podd began to throw roof tiles onto the pavement below and refused to cooperate with officers. He also removed the property’s guttering, which he threw down.

The defendant remained on the roof for six hours before he eventually came down shortly after 8pm. He was subsequently arrested by officers.

Podd, of no fixed abode, pleaded guilty to affray and criminal damage and also admitted an unrelated charge of assault after he attacked his former partner.

He also admitted having been in possession of a bladed article in relation to two incidents when he was caught carrying a knife.

On Friday (August 30), a judge jailed him for 32 months and issued him with a life-long restraining order forbidding him from contacting his ex-partner.

Detective Constable Mick Boyd, of Northumbria Police, said: “Leslie Podd is a serial criminal whose selfish actions caused a huge amount of disruption to the residents of Easington Lane.

“He spent six hours on the roof of the premises, causing significant damage to the roof, before pelting officers with the loose objects. He could easily have caused substantial injury to police or any member of the public who happened to be passing.

“Not only was his behaviour incredibly dangerous, but it also required a significant police response to ensure the safety of both himself and residents. Through his actions, he took resources off the streets and away from others who may have desperately needed a police response.

“He also disrupted the lives of local residents, some of whom lived in the building and were not able to enter for the duration of his criminal spree. There can be little doubt that Podd deserves the lengthy sentence handed down to him and he must now live with the consequences.

“I would like to thank members of the public in Easington Lane for their patience on the day of the stand-off, and hope this sends a message of how seriously we treat this type of disorder.”