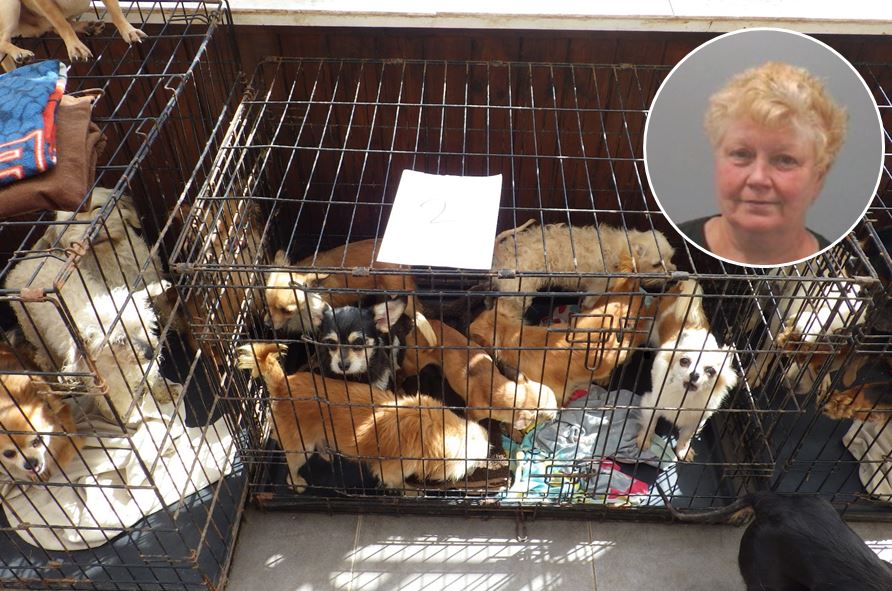 Police worked with the RSPCA on the investigation into Lynn Stoker, 63, who was jailed last week

A dog breeder who left more than 100 animals to suffer in crowded cages and with no drinking water has been jailed.

Lynn Stoker, 63, has been jailed for 21 weeks and banned from owning animals for life after police and RSPCA officers found the pets living in shocking conditions.

Whilst executing a warrant at her address in Byrness Village, Northumberland, in May last year, RSPCA inspectors found more than 110 neglected animals – including dogs, puppies, cats and tortoises.

Stoker was subsequently convicted and was found guilty of 15 animal welfare offences. On Thursday (September 12), she was sentenced to 21 weeks in prison, ordered to pay £50,000 costs and was disqualified from keeping animals for life after appearing before magistrates in Bedlington.

PC Peter Baker, of Northumbria Police, said: “This was an incredibly distressing case that saw more than 100 animals neglected and made to live in horrific conditions.

“Some animals were found in dirty and dingy kennels, which were clearly overcrowded, and many did not have any access to water or food.

“It is clear that Stoker showed a total disregard for the welfare of the animals in her care. There was urine and faeces all over the floor - she simply cannot be trusted to own animals.

“This conviction was possible because of some outstanding partnership work with the RSPCA, and I hope this sentence sends out a strong message that any pet owner who fails to ensure their animal’s welfare could face criminal action.

"Anyone who witnesses cruelty or an animal in distress should contact the RSPCA direct or 101.”

A court heard Stoker was first visited by the RSPCA in November 2017 and was offered help - including free vaccinations, neutering, health checks and treatment as well as assistance rehoming some of the dogs to bring the numbers down to a more manageable level.

Eleven dogs were signed over to the charity’s care for rehoming and officers arranged for vouchers for neutering and help for medical care for Stoker’s animals too.

But after five months of offers of help from the RSPCA the situation had not improved and officers from the animal welfare charity joined police to execute a warrant at the Byrness Village property on May 8 last year.

A total of 107 dogs - many suffering from ear infections and dental issues - six puppies, three tortoises and two cats were found living in unsuitable conditions and were seized by police and placed in to RSPCA care.

When officers arrived they found the dogs in rooms and outbuildings across the property with a number of them kept in training cages and dirty, dark kennels.

Those that were housed in crates were crammed in together and the animals that were roaming free moved in a pack.

The majority of dogs did not have any access to water or food and many were living in dark and dirty conditions - unable to escape from other animals.

RSPCA Inspector Heidi Cleaver, who led the investigation, described the property as “chaotic” and how every animal was affected by one or more welfare issues.

Insp Cleaver said: “When we walked in to one of the back rooms of the house we were just surrounded by dogs - they swarmed around our feet. Others were kept in crates and cages - some stacked on top of others - while others were kept outside in dark, damp and cold kennels with no bedding.

“There were a number of different breeds at the property - including chihuahuas, shih-tzu crosses, cockerpoos, King Charles Spaniels, terrier crosses, poodles and bulldogs. There were so many of them that only a handful of them had names.

“There were many health and medical conditions that were found in this very large group of dogs - mainly dental disease and ear infections.”

In one case in particular a white British bulldog was found with a condition known as ‘dry eye’ as well as hip injury and lameness which needed vet attention, while many others had dental issues and severe ear infections.

Insp Cleaver continued: “The house was chaotic and noisy and there was nowhere for any of the dogs to escape from each other. Many of the dogs were confined to cramped training cages and had no choice but to toilet in their bed and living areas.

“There also did not appear to be enough water bowls for the number of dogs at the location, to ensure that they all had access to fresh water at all times.

“The dogs were fed on left-overs from an army base - for example bacon, sausages etc - which are full of saturated fat, high in salt and not conducive to a healthy and balanced diet.

“Most of the dogs did not have access to warm, dry, comfortable bedding either and in the stone outbuilding there was no bedding despite the living conditions being cold and draughty.

Officers also found a Ragdoll cat with untreated cat flu and a tortoise with an untreated illness.

Following a trial, Stoker, of Raw House Farm, was found guilty of 15 animal welfare offences. Last week, she was sentenced to 21 weeks imprisonment, ordered to pay £50,000 costs and a victim surcharge of £115.

Stoker was also disqualified from keeping animals for life – which cannot be appealed for 15 years.