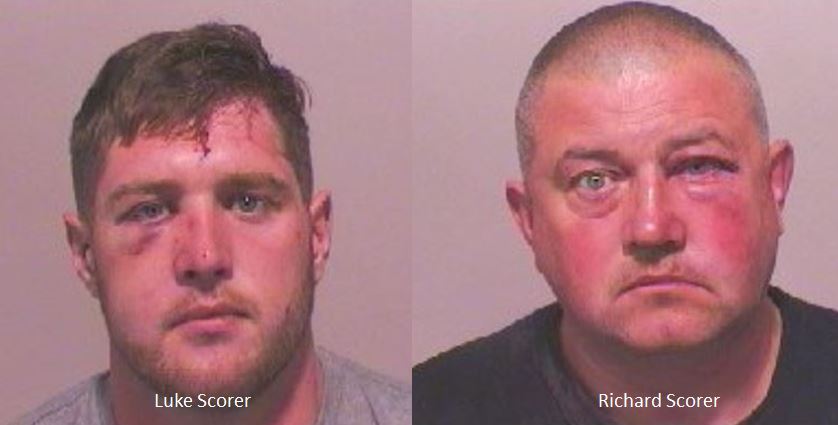 A drink-fuelled thug who broke into a family home and attacked a grandfather with a spade has been jailed.

Luke Scorer, 29, left a family in fear as he smashed the windows of their Houghton home in July 2018 while they were asleep inside.

An intoxicated Scorer, who wrongly believed the victim was involved in or responsible for the death of his uncle in 2017, stormed into the house and attacked the 55-year-old in a fit of rage.

The grandfather collapsed due to the amount of blood lost after being hit with a spade to the head, and suffered fractured arms as he desperately tried to protect himself.

Yesterday (Monday), Newcastle Crown Court heard that Scorer’s dad, Richard Scorer, also turned up at the house as the attack was underway and “inflamed” the situation.

Luke Scorer, of Mount Pleasant, Houghton, admitted causing grievous bodily harm and was jailed for a total of two years and eleven months.

Detective Constable David Horsley, of Northumbria Police, said: “This was a terrifying and unprovoked attack in a family home that left a grandfather with serious injuries.

“Under the influence of alcohol, Luke Scorer armed himself with a spade and smashed his way into the house before reining blows on an innocent member of the public, who was clearly petrified for his own safety and for the safety of his family.

“Scorer carried out the attack as a result of a mistaken and erroneous belief that the victim may have in some way been involved in his uncle’s death one year earlier.

“This type of behaviour is totally unacceptable and will not be tolerated under any circumstances. He now begins a custodial term as a result of his despicable actions.

“I would like to thank the victim and his family for their bravery and cooperation shown throughout this case. The impact of this incident has caused inevitable distress and pain, both physically and psychologically, and I hope these sentences can give them some kind of closure.”

In a statement read out in court, the victim admitted Scorer’s actions have had a “significant impact” on his life.

“After the defendants fled the scene, I collapsed due to the amount of blood I lost from the wound caused by being hit with a spade to the head and the wounds to both my arms, which had been broken.

“I was rushed to hospital semi-unconscious by an ambulance and sent into an emergency two-hour operation on my right arm that Luke had broken by hitting me with a spade when I was on the ground.

“The stress of the attack has caused me to develop insomnia which is causing a significant impact on my life. I cannot stop worrying on a night-time in case they come back.

“We are completely unaware of why they decided to try to take my life and this makes me feel more vulnerable in my home.”