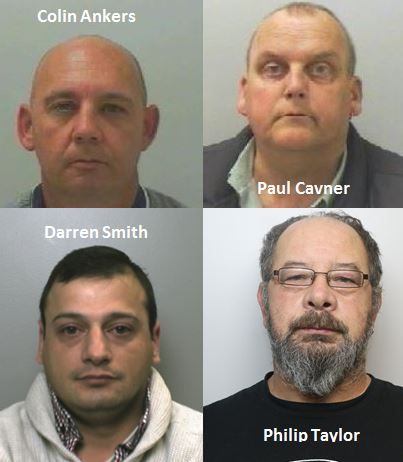 A victim who was subjected to six years of sexual abuse by a gang of four men has today thanked police – as her abusers were today jailed for a total of 53 years.

The vulnerable woman had been abused by the men when she was a child after a man offered her to them in return for cigarettes and alcohol.

She was abused on a number of occasions over a period of six years but it wasn’t until she was an adult that she bravely contacted police.

The abusers were charged with a host of sexual offences and in May they were found guilty of a total of 37 counts of sexual assaults, including multiple rapes.

Lead investigator Detective Jaclyn Younger was in court on behalf of the victim today (Monday) to hear Judge.... put the four men behind bars for 53 years.

Colin Ankers, 45, of Waterville Road, North Shields was found guilty of 14 counts of rape and four counts of indecent assault and was sentenced to 21 years

Philip Taylor, 60, of Whiteley Avenue, Sowerby, West Yorkshire was found guilty of three counts of rape and four counts of indecent assault and was sentenced to 17 years.

Darren Smith, 36, of Irene Avenue, Stoke-on-Trent was found guilty of five counts of rape and five counts of indecent assault and was sentenced to six years.

In a statement read out in court, the victim said she “didn’t know any different” during the abuse but she has called on other victims to report abuse to police.

She said: "The trial has been very difficult for me but it’s the closure that I need to be able to move on with my life. I have had to do this for me and I am proud of myself.

"My childhood was taken at the age of nine when Colin Ankers began to groom me and stole my childhood. Out of all of the men who abused me, Colin Ankers was the worst.

"He had a hold over me, very controlling and has destroyed me the most. The abuse has affected my adult relationships with men. I have never been happy and settled, I have been used as a sex toy, a punch bag, a victim of abuse.

“I didn’t know any different, I didn’t know what was and what wasn’t acceptable. I had no confidence, no self-esteem and beatings were normal. I have done this for me and only me so I can move on."

Detective Constable Jaclyn Younger, of Northumbria Police’s Safeguarding Department, was in court as the sentence was handed down and has praised the victim for her bravery throughout the case.

Det Cons Younger said: "These horrific abusers are now behind bars thanks to the bravery of this victim. I can't stress how much courage it would have taken for the victim to have made that initial phone call to police.

"She said she felt ashamed at the time but she didn’t know any different. It was her way of life which she believed was normal. The fact that it has affected her in her adult life, it has affected relationships, she’s had nightmares and flashbacks but this is the closure that she needs to move on with her life.

"It has been a rollercoaster of emotions but she is so happy and relieved that they have been found guilty and are now all behind bars. She knows that they would never admit to the horrendous things that they did to her as a child.

"She describes herself as a survivor, she was a little girl who had to grow up far too fast due to the abuse but she is now stronger than she has ever been.

"If anyone out there suffering in silence the strength to come forward and know that it is never too late to report to police."