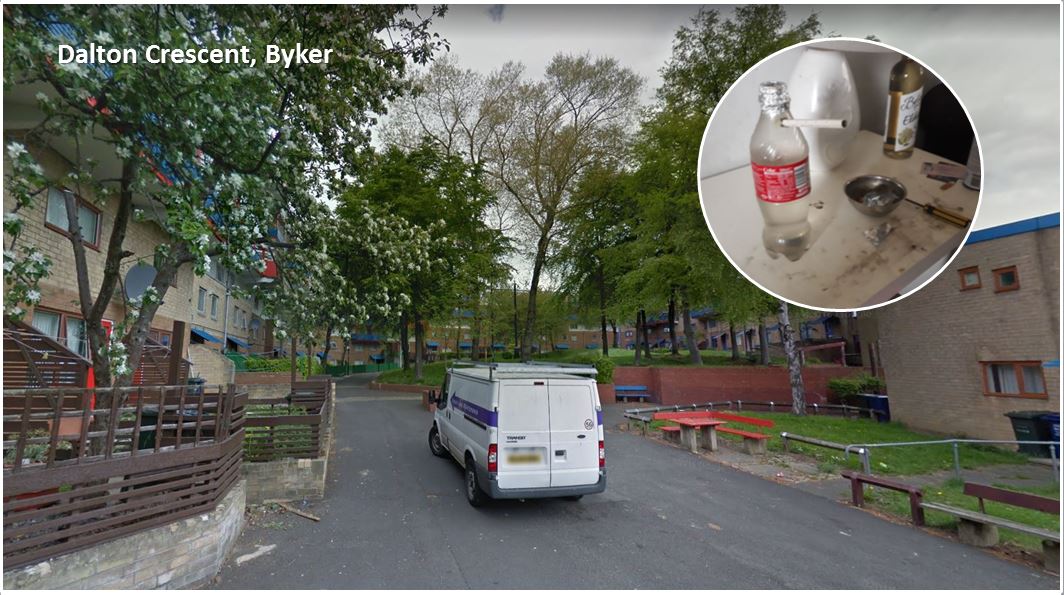 A residential house has been shut down and the occupant made to leave after it became a hive for anti-social behaviour and drug use.

The tenant of the property on Dalton Crescent in the Byker Wall has been banned from entering his home after a closure order was secured at magistrates’ court on Friday (September 20).

In recent months police and the Byker Community Trust had received numerous complaints from residents about anti-social behaviour and suspicious activity at the address.

In August, officers from the neighbourhood policing team executed a warrant at the property and seized drug paraphernalia and a haul of suspected stolen goods.

The occupant was arrested on suspicion of theft from motor vehicles and released under investigation.

However, police decided to team up with Newcastle City Council and Byker Community Trust to see if they could use civil legislation to prevent further anti-social behaviour at the address

They applied for a closure order on the property that would see the tenant forced to leave the property for three months. The order was granted by magistrates in Newcastle on Friday.

He said: “We worked with the city council and Byker Community Trust last month to secure a closure order on another property and know it is an effective way to support the local community.

“Where it is appropriate we will pursue criminal prosecutions but there are other ways to respond to concerns from residents in our patch.

“We enjoy a really positive working relationship with the city council and partners and we regularly adopt a partnership approach to bring about positive change.

"This particular property is believed to be linked to drug use and as a result has become a hub for anti-social behaviour.

"It has made life a misery for residents who have been reporting their concerns to police and Byker Community Trust so I hope this action offers them some reassurance.

"We would not have been able to secure this closure order if it was not for their support and so this shows the value in reporting concerns to police.

"It shows how effective working with partners can be and I want to thank both the city council and the Byker Community Trust for their support."

Cllr Clare Penny-Evans, Newcastle City Council cabinet member for Communities and Climate Change, said: “When people’s actions become a nuisance for others in the community we will do what we can to help residents feel safe in their own neighbourhoods.

“We have demonstrated here and in other cases recently that we are prepared to step up when anti-social behaviour persists and work with our partners to take robust action against those who fail to change their behaviour.”

“I was pleased to see the closure order put in place last month and it is welcoming to hear that neighbourhood officers are continuing to team up with the local authority.

"The best solution may not always be through a criminal court and I have seen first-hand the positive impact this type of partnership work can have in the community.

"I hope this can have a positive impact on the local community and shows residents in Byker, and across the Force area, that we are fighting their corner."

The closure order, under the Anti-Social Behaviour Crime and Policing Act 2014, was heard before a judge at Newcastle Magistrates’ Court on Friday (September 20).

It prevents anyone from entering the property for three months except from employees and agents of the landlord, members of the council or the emergency services.

Any breach of the order could lead to a criminal prosecution that would see a possible prison sentence or fine upon a successful conviction.

Anyone who wants to report anti-social behaviour or suspicious activity can do so by calling 101 or anonymously through Crimestoppers on 0800 555 111.

You can also report information online by visiting the Northumbria Police website.