A domestic abuser has been jailed after he repeatedly ignored court orders preventing him from contacting his victim.

Lee Pritchard, 41, has been sentenced to four weeks behind bars after ignoring police and court warnings about contacting or visiting his ex-partner.

He was initially handed a Domestic Violence Protection Order (DVPO) on March 19 after a complaint from the 36-year-old victim.

But Pritchard, of Heaton Park Court, Heaton, breached it within 24 hours and so was arrested and charged to appear before magistrates.

At court he was handed further restrictions banning him from contacting his victim or visiting the area where she lived.

But just over a week later he again attempted to contact her and so he was arrested and charged with breaching his conditions.

On that occasion he was handed a £150 fine but he was back in court last week after another breach of the DVPO.

On April 8, Pritchard was jailed for four weeks by magistrates in North Tyneside and will be handed further restrictions upon his release from custody.

Today (Wednesday), a senior police officer has reassured victims of domestic abuse across Northumbria that support is there if they need it.

Detective Chief Inspector Claire Wheatley, from Northumbria Police’s Safeguarding Team, said: “I am pleased Lee Pritchard has been jailed after he repeatedly breached police and court orders in a short period of time.

“We know that home can’t always be a safe place for everyone and that can be made even more difficult by the restrictions currently in place to prevent the spread of Coronavirus.

“But I want victims of domestic abuse to know that we are here for you and that if you need to leave the home to get support then we can help.

“We have had two other recent DVPO breaches which have resulted in prison sentences for the offenders so action is being taken and support is available for victims.

“If you tell us what is happening to you then we will do everything we can to put offenders like Lee Pritchard before the courts.” 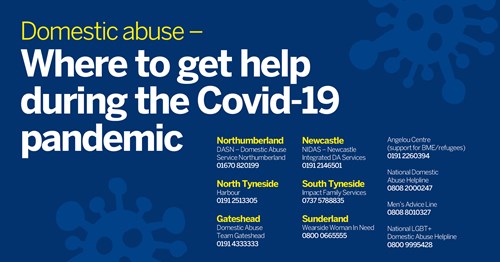