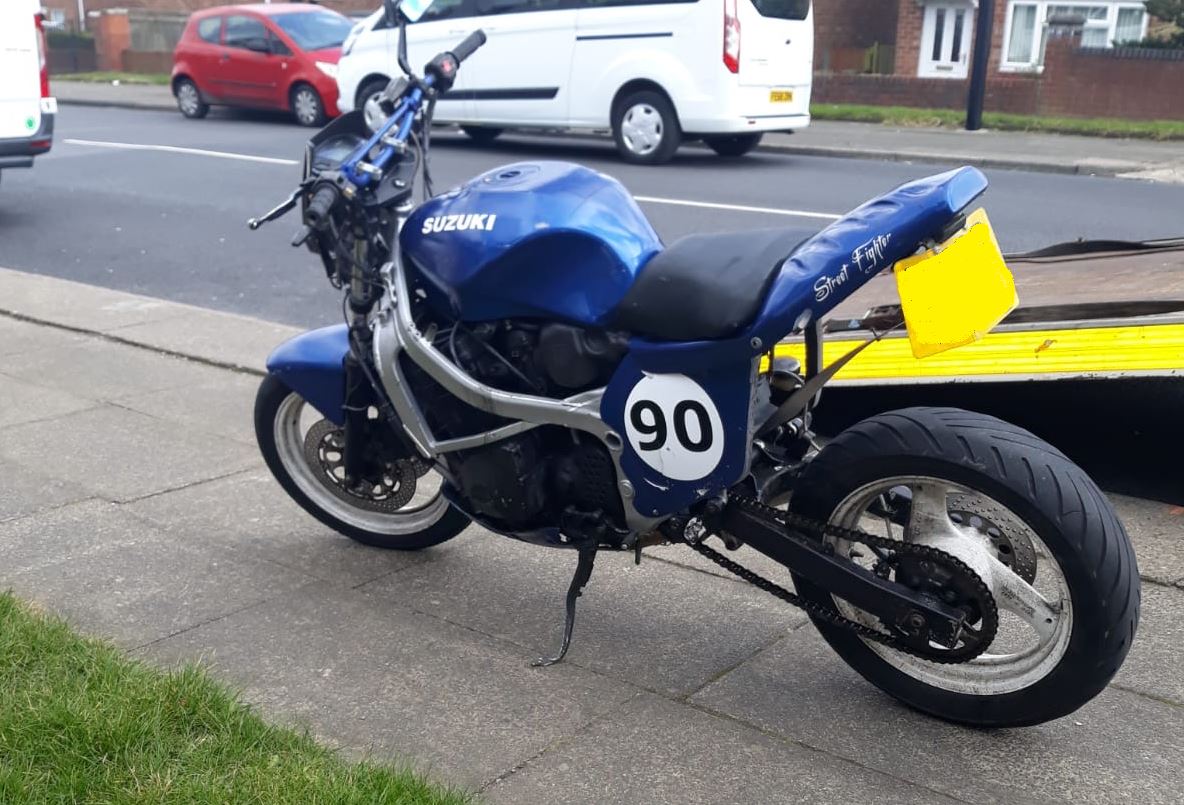 Eagle-eyed cops seized an off-road motorbike claimed to have been tearing around an estate – just minutes after an upset resident had reported it to police.

Last week (March 25), officers were on patrol in the Grindon area of Sunderland when they were approached by an elderly man who appeared distressed.

He told officers that he was increasingly frustrated by motorcycle-related anti-social behaviour in the area and stated his wife, who has a long-term health condition, could not cope with the noise in the street.

After reassuring the pensioner, officers took down details of a blue-and-white motorcycle that had reportedly been tearing around the estate and bringing misery to many residents.

Minutes later while carrying out enquiries, the officers spotted a motorbike matching the description provided by the man and decided to follow its movements. They later saw the rider stop, get off and push the vehicle into an address nearby.

After carrying out checks, it was ascertained that the vehicle was not insured. The bike was subsequently seized by police and a 31-year-old man is due to be summonsed to court for driving offences.

Neighbourhood Inspector Marie Pollock, of Northumbria Police, said: “This was a case of good old-fashioned policing with officers acting on their instinct after they were made aware of concerns from a member of the public.

“After taking down the details, they then followed their nose and spotted a motorbike matching the description given by the concerned resident. It was soon ascertained the rider had been travelling without insurance and the bike was subsequently seized.

“We understand the distressing and detrimental effect that anti-social behaviour can have on the communities we serve, and that’s why through Operation Brimstone, officers are actively targeting motorbike-related disorder and taking these vehicles off our streets.

“We have dedicated patrols in place in hotspot areas to tackle this type of criminality, and I would like to reiterate that this is far from a victimless crime – the actions of a minority who tear around on these bikes can make the most vulnerable in our society feel intimidated and frightened.

“As a result, we will continue to carry out a range of enquiries to keep our communities safe from motorbike-related crime and ensure anyone found responsible is dealt with swiftly.

“If you see any off-road riders or vehicle-related crimes happening in your area, please get in touch with us. We also want to hear from anyone who believes they know where these bikes are being stored overnight.”

Anyone with information, or who is concerned about this type of criminality in their area, is asked to get in touch with us via the ‘Tell Us Something’ or ‘Report an Incident’ page on our website.