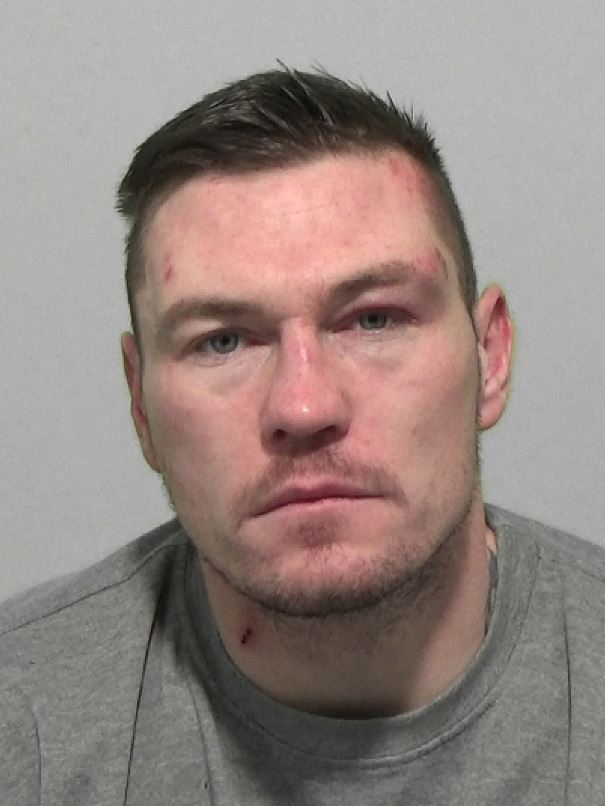 Detectives have welcomed the sentence handed to Ryan Ellis, 33, following his string of offending

A serial criminal who robbed two shops within an hour and left staff members terrified has been jailed for seven years.

Ryan Ellis, 33, stormed into Ray’s store in the Hendon area of Sunderland on December 14 last year and tried to climb over the counter and steal money from the till.

After being talked down by a brave shop worker, Ellis left empty-handed but continued his cynical spree by targeting the Premier store on Villette Road a short time later.

There he ripped off a side-door and helped himself to money from the cash draw after using considerable force to overpower a lone female member of staff.

After identifying him as the main suspect, officers issued a wanted appeal to locate Ellis, of no fixed address, and were able to bring him into custody after a three-day manhunt.

He admitted his role in both of the raids when appearing at Newcastle Crown Court earlier this year (January 13), as well as a burglary he committed at Spar on Ewesley Road in Sunderland on November 25 last year when he stole a worker’s bag.

He also confessed to stealing jewellery and cash worth more than £5,500 from a home on Cleveland Road last November– after forensic experts spotted a trace of blood that he had inadvertently left on a door handle.

And Ellis admitted further separate offences of shoplifting, dangerous driving and assault on an emergency worker after he threw cup of water over a police officer when detained at Southwick Police Station.

Ellis was back in the dock for sentencing at Newcastle Crown Court yesterday (Wednesday) where a judge jailed him for seven years. He was also handed a five-and-a-half year driving ban.

Detective Constable Michael Parnaby, who investigated the case, said: “Ryan Ellis has been a drain on police resources for some time due to his widespread and frequent offending – so I am pleased that he has now been handed a significant custodial sentence.

“He has brought misery to many through his selfish and frightening actions, targeting some of the most vulnerable in our communities by raiding shops staffed by lone females and breaking into people’s homes to steal their hard-earned cash and possessions.

“There can be no doubt whatsoever that the streets of Sunderland are a safer place with Ellis behind bars, and I am pleased that the severity of his offending has been recognised by the judge.

“I hope this sends out a strong and important message to all those we serve, at a time when the overwhelming majority of people are all pulling together and showing a real community spirit as we work together to tackle the spread of Covid-19.

“We will not tolerate the actions of those who look to undermine the very fabric of our communities, and we will do all we can every single day to make sure those individuals are arrested, charged and ultimately brought to justice.”