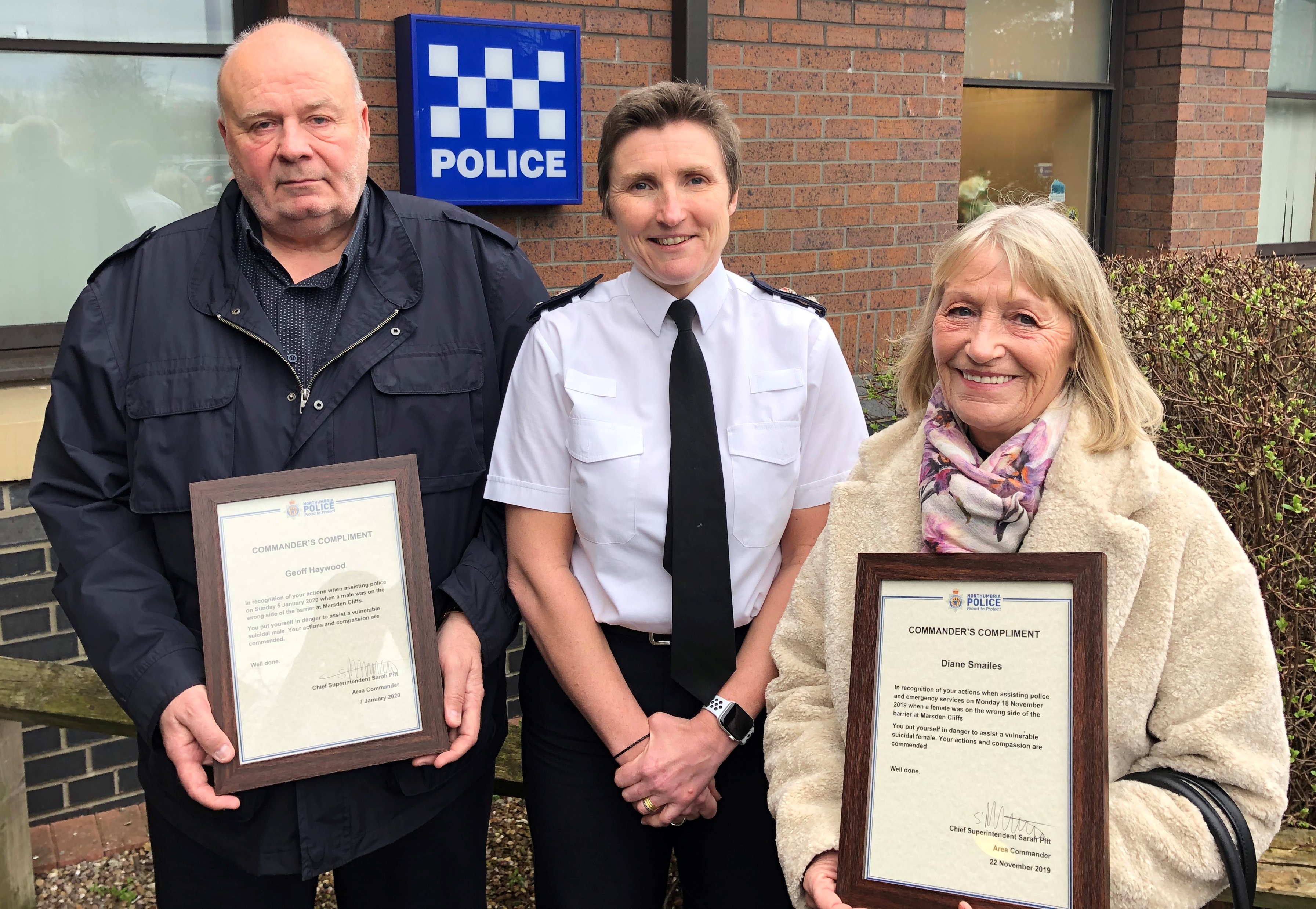 Two caring neighbours have received police commendations after helping to bring vulnerable adults down from a dangerous cliff-edge.

Good Samaritans Diane Smailes, 64, and Geoff Haywood, 63, displayed outstanding bravery after they both spotted somebody in crisis on Marsden Cliffs within weeks of each other.

Faced with difficult scenarios, Diane and Geoff showed admirable composure as they each helped the respective adults away from the edge and waited with them until officers arrived.

The pair, who live close to each other in South Shields, were unaware of each other’s selfless actions – until they were invited into Millbank Police Station last week.

There they were both presented with commander’s compliments by Chief Superintendent Sarah Pitt as a show of gratitude for their bravery.

“Unfortunately it is not uncommon for us to receive calls about vulnerable people who are in crisis on one of our region’s cliffs or bridges,” Chief Supt Pitt said.

“When we do receive calls of this nature, these people are quite often in a very dark place and at their lowest ebb, in desperate need of help and support.

“Thankfully there have been countless occasions when officers have managed to save people’s lives by bringing them to safety, and with support from our partners,  ensure they receive appropriate support so they don’t find themselves in the same position again.

“On these two separate occasions when Diane and Geoff heroically stepped in, they were the first people to spot the vulnerable person in crisis – and it would have been easy for them to ignore what they saw.

“While we would not encourage members of the public to put themselves in harm’s way, by acting decisively and quickly, Diane and Geoff managed to save those people from harm and showed incredible compassion and bravery in the process.

“They should both be incredibly proud of their actions, and I thought it was only right to thank them personally on behalf of the Force."

After seeing a woman on the cliff edge at Marsden Grotto on the morning of November 18 last year, Diane put her own safety to one side as she crossed the barrier and sat with the vulnerable female while her friend phoned police.

At one point, the female stood up and Diane took hold of her arm to stop her falling – before officers arrived and successfully brought them both to safety.

Weeks later, on the morning of January 5 this year, Geoff was walking his dog when he saw a vulnerable man who had gone over the cliff edge and was holding on to the grass with his hands.

With help from others nearby, Geoff managed to drag the man back to safety before police were able to leave him in the hands of healthcare professionals.

Chief Supt Pitt added: “We are committed to protecting the most vulnerable in our communities – but these separate incidents show we also need the public’s support to work with us and raise the alarm when they see a vulnerable person in crisis.

“I have nothing but praise for Diane and Geoff, and their commendations are just a small gesture as a way of thanks for their incredibly brave actions.”