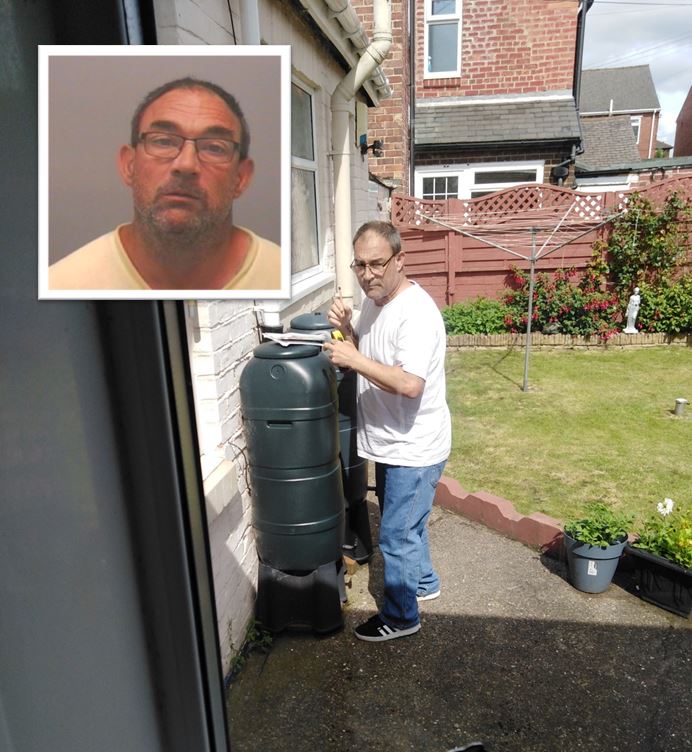 A despicable cowboy builder has been jailed after he fleeced a dozen vulnerable pensioners– just weeks after being released from prison for doing the exact same thing.

Heartless Anthony Jarrett, 42, has been sentenced to two years behind bars after being convicted of 12 offences of fraud by false representation.

A court heard how the tradesman went door-to-door across Newcastle and North Tyneside and offered to do work around the house for dozens of vulnerable pensioners.

Between June and August last year he convinced victims they needed work done to their homes and charged them large deposits – but then never returned to complete the jobs.

Police were called and launched an investigation during which they established the cowboy builder had taken more than £3,600 from the pockets of his victims.

Detectives identified Jarrett as a suspect after learning he had been released from prison just weeks before the first offence was committed.

Jarrett, of Shafto Street, Scotswood, Newcastle, had been jailed in March last year for defrauding vulnerable pensioners across Sunderland and South Tyneside of thousands of pounds using the same tactics.

However, he had been released in early June, just three months into the two-year custodial sentence, due to time served on remand.

Victims were then able to identify Jarrett as the person responsible. He was arrested and on Monday (February 17) he was jailed for two years after admitting all charges against him.

He said: “Anthony Jarrett is a despicable human being who has repeatedly exploited some of the most vulnerable people in society.

“He has been given opportunities to turn his life around and he has spent time in prison to reflect upon the impact his offending had on his vulnerable victims.

“That makes it even more horrendous that he has continued to target elderly victims within weeks of being released from prison.

“I welcome the fact that this man is back behind bars and I hope that those victims whose confidence has been rocked by these incidents feel that some justice has been done.

“They have shown incredible bravery to come forward and report what has happened to them so I am pleased that we have secured a result for them in court.

“If you have vulnerable friends, relatives or neighbours then please speak to them and ensure they have not been targeted in this way.

“If they have been exploited then we hope this case reassures you that we will take action to put offenders like Anthony Jarrett before the court and behind bars.”

At the sentencing at Newcastle Crown Court, statements were read out from some of Jarrett’s victims and Keith Robertson was one of those who said Jarrett made him “feel completely vulnerable”.

The 80-year-old said: “I still feel angry and upset about what has happened. I invited this man into my home and gave him coffee and biscuits but the whole time he was trying to con us.

“I feel disgusted by what he has done. Me and my wife are both retired and we can’t afford to just lose money or have it stolen from us.

“It makes us feel completely vulnerable and saddened that Anthony took our money without a second thought and was never to be seen again.”

A 70-year-old woman who lost £500 to the fraudster said: “I feel uncomfortable in my home by myself and do not now answer the door at nights. This is something I would have never done before.

“I feel violated that Anthony come into my own home and took money from us. Not only did he come into our home but I find the fact he waited for me to come back from the bank with money shows he was determined to defraud us.”

A 72-year-old woman who lost £400 said what made her the most upset was the fact Jarrett lied about his father dying as an excuse not to return to complete the work.

She said: “I still fell so angry that Anthony has treat us in this way. It still disgusts me that he had come into our house and conned us repeatedly whilst a guest in our home.

“I am not only angry with Anthony but I am also angry with myself for handing the money over. I feel stupid that I did that and feel he must have been laughing behind my back.

“It upsets me even more to think that Anthony told us his father had died. I remember feeling sad for him at this time, it upsets me that he has used this as an excuse.

“I remember telling family that Anthony couldn’t have conned me and that his father had died. I feel really stupid now about this and feel gullible.”

Anyone who is concerned that a vulnerable friend or relative may have been targeted by a fraudster is encouraged to call 101 or report it online on the Northumbria Police website.

You can also visit the Force’s website to read advice about what to prevent vulnerable people from falling victim to this type of criminality.