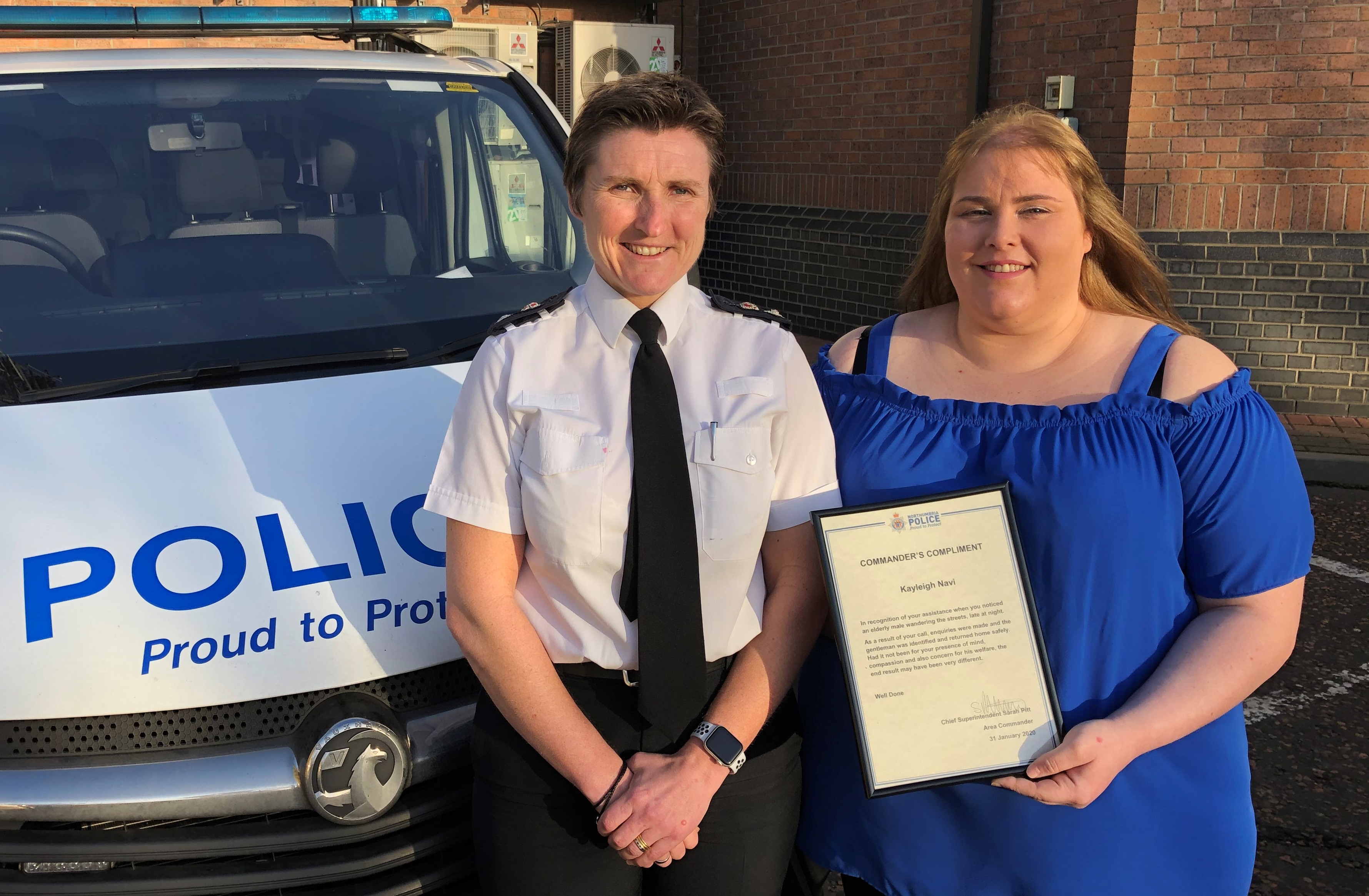 Cops have praised a kind-hearted care worker after her quick reactions helped reunite a vulnerable pensioner with his family.

Kayleigh Navi, 31, has received a Northumbria Police commendation after she spotted an 80-year-old man wandering the streets of Jarrow late at night on January 22.

Worried for his welfare, Kayleigh asked the man whether he was OK – but realised something was not quite right as he appeared to be in a confused and dazed state.

Realising he might need help, the instinctive neighbour - who works with the elderly through her role as a care worker in South Tyneside - rang 101 and led police to his location.

It transpired that the vulnerable pensioner, who has dementia, had left his home address three hours earlier but had got lost. With no phone and his wife recovering from an operation, he found himself alone and confused.

After police safely returned the man home and reunited him with his family, officers were quick to highlight Kayleigh’s crucial and caring intervention.

On Monday (February 3), she was invited into Millbank Police Station and was presented with a Commander’s Compliment by Chief Superintendent Sarah Pitt as a gesture of thanks.

“This could have so easily had a different outcome,” Chief Supt Pitt said. “This was a vulnerable man who had got lost and didn’t know his way home. It was late at night, there was hardly anybody around and it was dark – the temperatures were dropping.

“Kayleigh could have ignored what she saw, assumed the man was fine and carried on. Without her intervention, the reality is that he could have come to serious harm and it inevitably would have resulted in officers launching a significant missing person operation.

“Thankfully, that was not the case which is entirely down to Kayleigh’s kindness and willingness to trust her instinct. By spotting something did not seem right and ringing police, she helped us protect a vulnerable man and bring him safely home.

“Dementia is a complex condition which can affect people in so many different ways – and this case reinforces an important message. We all live busy lives but should try to be more aware of those around us, especially those who look particularly vulnerable, and check they are OK.

“Kayleigh’s actions resonated with my officers and she richly deserves this recognition. We all have loved ones and this could have been anybody – your grandma or granddad, mum or dad.

“She should be very proud of her actions and I know the public will share my thanks to her after going above and beyond.”

After being presented with her commendation by Chief Supt Pitt, Kayleigh said she did what “anybody would have done.”

“I’m just pleased that the gentleman has returned home safe and well,” she said. “I work with elderly people through my job, and seeing him walking alone at half-ten at night – it just didn’t seem right.

“That’s why I contacted police and I’m really pleased that this had a positive outcome. I did what anybody would have done – but I’m very grateful to receive this commendation”.

Anybody who knows a loved one living with dementia is encouraged to sign up to the Force’s Herbert Protocol.  The initiative requires the family, friends or carers of people with dementia to fill out a form that can assist police if their loved one ever goes missing.

It means officers searching for a vulnerable person will have quick access to a photograph, their routine and other information that could help trace their whereabouts.