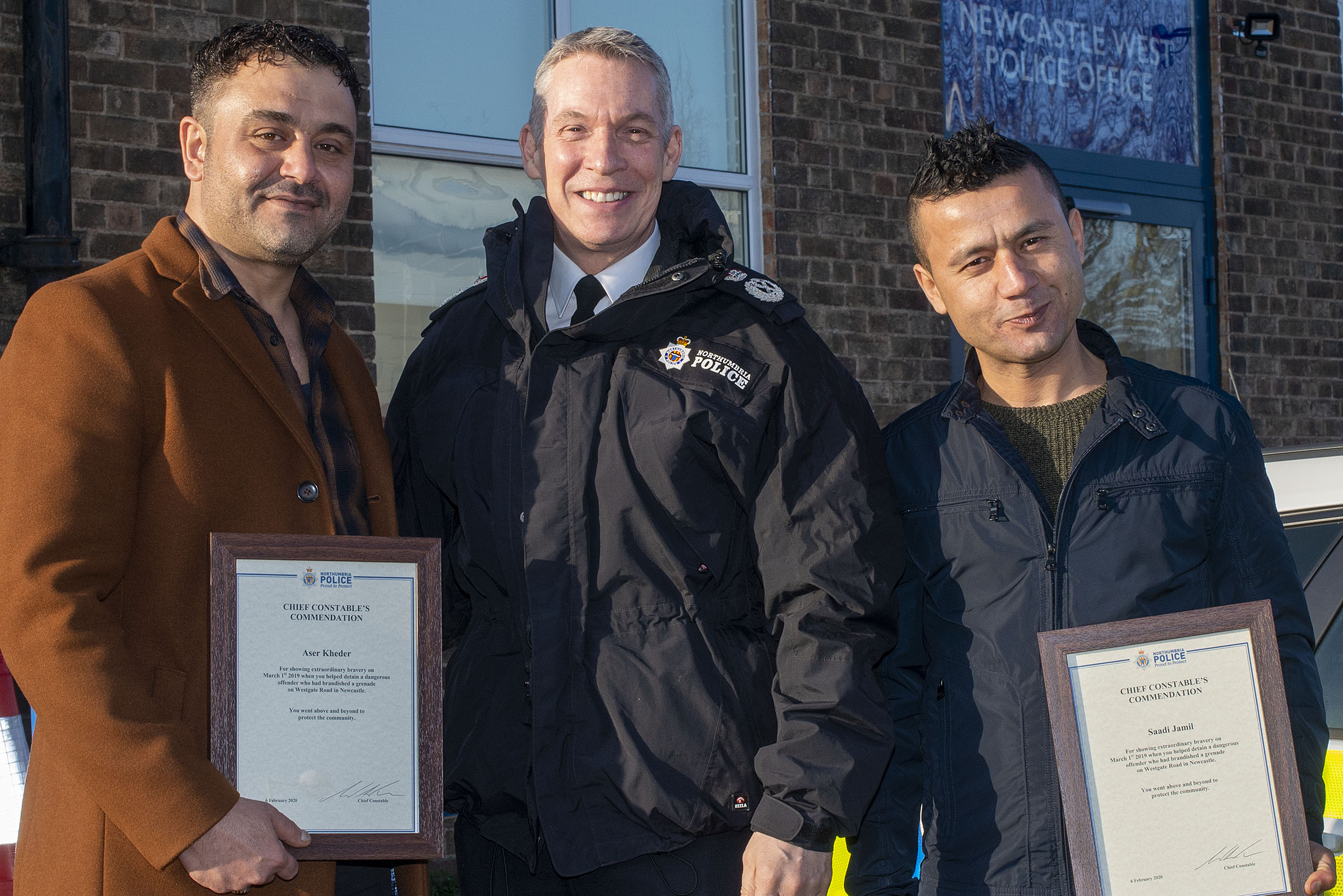 Two community heroes who tackled a man to the ground after he brandished a grenade in a Newcastle phone shop have been commended by the region’s top cop.

Aser Kheder and Saadi Jamil have each been awarded a Chief Constable commendation after they detained 61-year-old Abdul Ibrahim last March.

Northumbria Police’s Chief Constable, Winton Keenen, met the pair on Thursday to thank them for the extraordinary action they took to keep their community safe.

Ibrahim had entered a phone shop on Westgate Road brandishing a grenade and shouting “Allahu Akbar” after a dispute with the shop owner.

Mr Kheder was looking after the shop at the time and, fearing he had been confronted with a terrorist, clasped his hand over the grenade and wrestled the man to the ground.

He was joined by Mr Jamil who helped keep Ibrahim pinned to the floor, despite their fears that the grenade could explode at any second.

Police arrived on scene and placed the suspect under arrest before putting a cordon in place and evacuating the street. Bomb experts then assessed the grenade and were able to establish it was inactive.

Last week Ibrahim was jailed for five years and during his sentencing at Newcastle Crown Court a judge commended Mr Kheder for his actions.

Now, Chief Constable Keenen has echoed the judge’s comments and said both men had gone “above and beyond” to protect their local community.

He said: “It is a real honour to be able to meet Aser and Saadi so I can thank them in person for their extraordinary actions that day.

“It is difficult for many of us to comprehend what would have been going through their minds when they were confronted by a man carrying what appeared to be a genuine explosive.

“The fact that they showed no regard for their own welfare and took actions to try to save the lives of their local community is what makes them true heroes.

“It is a privilege to be able to recognise their bravery and I hope this small gesture goes some way to showing them how proud we are to have them in our community.”

Mr Kheder, who lives in the west end of Newcastle, came to the country as a refugee from Kurdistan after serving as a police officer for 15 years and in the country’s special forces.

Speaking after receiving his commendation, the 41-year-old said: “I don’t know what other people would have done in my position but I didn’t have to think about what to do.

“All I could think of was that many people could have been killed if the grenade had exploded and I needed to stop something from happening.

“There was a school nearby and lots of people on the road and I was frightened that many people could have been killed if I did not take action.

“This country has given us so many opportunities and I would not think twice about doing the same thing again.

“It is an honour to be given this commendation by the Chief Constable and I want to thank Northumbria Police for all of their support.”

Mr Jamil, 37, added: “I was frightened when I saw what was happening but I knew that I needed to help Aser to try to keep this person detained.

“Neither of us took these actions because we wanted to be recognised as heroes or nominated for awards. We did it because we thought it was a matter of life or death.

“I think many people would have done the same thing if they were in our shoes but it is great that the Chief Constable has taken the time to meet us in person.”

Ibrahim, of Deckham Terrace, Gateshead, admitted making threats to kill and making a hoax bomb threat and was jailed for five years on January 27.

During the hearing at Newcastle Crown Court, it was accepted that Ibrahim was mentally unwell and that, despite his comments, his actions were not religiously motivated.