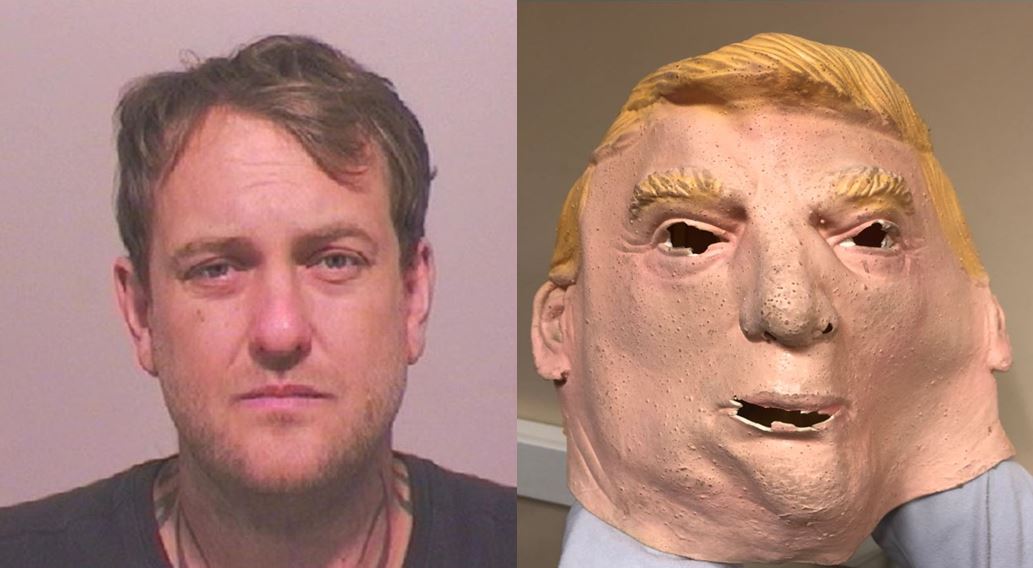 Officers located Mills, 35, in a vehicle near the Hill Park estate in Jarrow and in his possession were two knives and the unusual disguise

A menacing crook has been convicted after loitering near an allotment armed with knives – and a Donald Trump mask.

Keith Mills, 35, was found with two knives and the unusual disguise as he lurked in a scrap van near the Hill Park estate in Jarrow on May 14 last year.

Following a long-running family feud, earlier that day Mills warned a relative he was going to deliberately damage his estranged dad’s allotment and wait for him there wearing a disguise.

On the same day, the defendant was also spotted rummaging through wheelie bins on Stanley Street – which prosecutors claimed was an attempt to find out his father’s address.

Officers were alerted to Mills’ erratic behaviour, and upon arriving at the victim’s allotment, they found metal fence railings at the edge of the plot had been damaged.

A search of the area was carried out and Mills was later located in the driving seat of a van nearby with the engine still running. Inside the vehicle they found two knives, a saw and a Trump mask.

The offender was subsequently arrested by police.

At a Newcastle Crown Court hearing on September 4 last year, Mills, of Pine Street, Chester-le-Street, pleaded guilty to possession of a knife in a public place and possession of an offensive weapon.

On Thursday (January 16), a judge sentenced him to 16 months imprisonment and also handed Mills an indefinite restraining order which bans him from contacting his victim.

PC Judith Holtham, of Northumbria Police, said: “Mills’ behaviour on that morning was erratic and alarming. His actions understandably caused a great deal of distress to members of his family and frightened his father, who feared for his life.

“Upon locating the defendant, officers found him to be in possession of two knives that could have been used to cause significant harm.

“It is totally unacceptable – under any circumstances – to carry a knife and we are committed to ensuring anybody who is found in possession of these weapons is rightly brought to justice.

“Mills now must deal with the consequences of his actions, and I hope this conviction makes him consider the impact that his selfish behaviour can have on others.”

In a statement, Mills’ father told the court that he loved his son but was scared by his behaviour.

He said: “I love and miss him so much, but the way he is I am absolutely terrified of him and I don’t think I could ever have him back in my life for what the stress would do to me.”