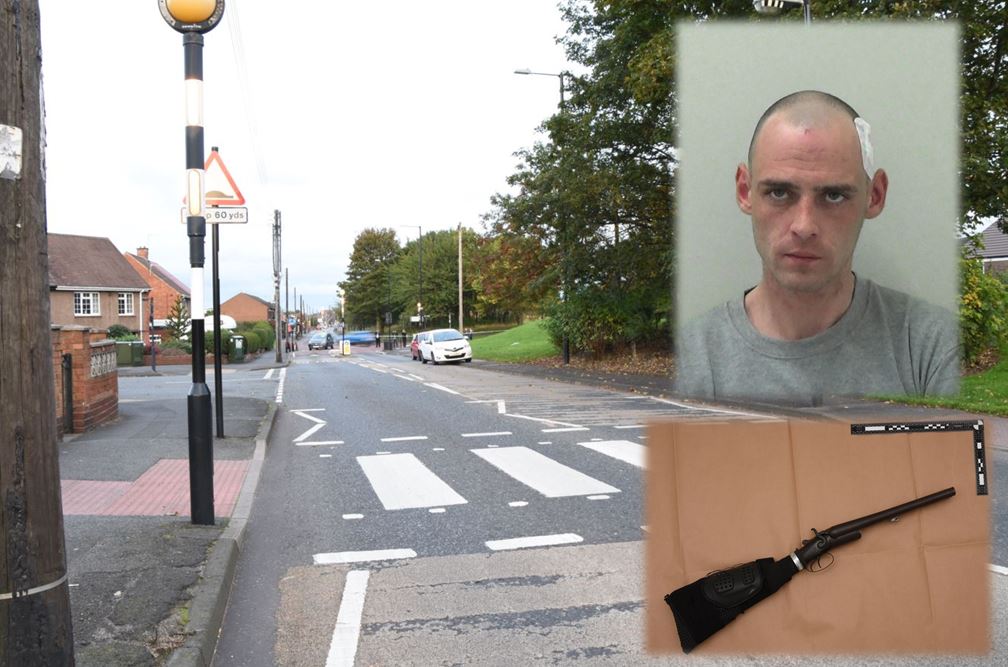 Dees, 33, left his victim with life-changing injuries following the point-blank shooting and attempted to cover his tracks

A gunman who fired a sawn-off shotgun and left his victim for dead has been convicted.

The violent offender tailed his victim, of whom he had been in a dispute, in a car before summoning him to the passenger side window.

Dees then fired his gun at point-blank range before fleeing the scene and attempting to cover his tracks. The man suffered severe and life-changing injuries but incredibly survived the blast.

Today (Tuesday), Dees, of Wensleydale Avenue, Washington, admitted attempted murder, possessing a shotgun with intent to endanger life and criminal damage at Newcastle Crown Court. He will be sentenced later this year.

Detective Sergeant Steven Brown, the officer in charge of the case, condemned Dees’ actions and said it was a “miracle” that the victim was not killed in the incident.

“This was a terrifying and pre-meditated shooting committed in broad daylight on a bustling Washington street,” Det Sgt Brown said.

“Dees followed his victim in a car, acting aggressively and erratically, before calling him over and firing a sawn-off shotgun at point-blank range.

“It is nothing short of miraculous that the victim survived – we could so easily have been dealing with a murder investigation and conviction.

"Dees proved that he cannot be trusted to live in a lawful society and now faces a long time in prison. There can be no doubt that the streets of Washington are a safer place with him behind bars.

“The victim in this case has shown incredible bravery throughout this case, and I would also like to thank the detectives who worked meticulously and tirelessly to ensure Dees was brought to justice for his crimes."

Chief Inspector Nicola Wearing added: "Today's conviction reinforces our commitment to tackling serious and organised crime which undermines and threatens the fabric of our community.

"We want to reassure the people of Washington that incidents involving a firearm are thankfully rare in this area. However, when they do occur, this case shows we will use every resource available to us in order to secure a swift and successful prosecution.”

The court was told the victim and two friends were driving in a blue Transit van when they heard a car horn sounding behind them.

After looking around, they saw an incensed Dees who was acting aggressively and vowed he was going to “smash” his victim.

The trio pulled away but a short time later Dees reappeared in the same vehicle and followed them until they pulled over outside the One Stop Shop on Blue House Lane.

With Dees revving his engine loudly, the victim got out of his car and was beckoned to the passenger-side door.

Dees then pointed the sawn-off shotgun at his victim and pulled the trigger, causing severe injuries including a large gunshot wound to his chest, shattered ribs and damage to his liver.

As his victim fell to the ground and fought for his life, Dees then drove off and attempted to cover his tracks by removing his car’s metallic black wrap – changing its appearance to silver – and peeled off vinyl stickers which he discarded in a wheelie bin.

The offender had also shaven his head in an attempt to change his appearance when officers located him.

He was swiftly arrested and police found the shotgun and unspent cartridges hidden in a rucksack left in a vacant address next door to a property belonging to a friend.

Dees refused to cooperate with police upon arrest, but with the weight of evidence against him overwhelming, today (Tuesday) he admitted attempted murder, possessing a shotgun with intent to endanger life and criminal damage in relation to his police cell.

He is due to be sentenced on April 24.