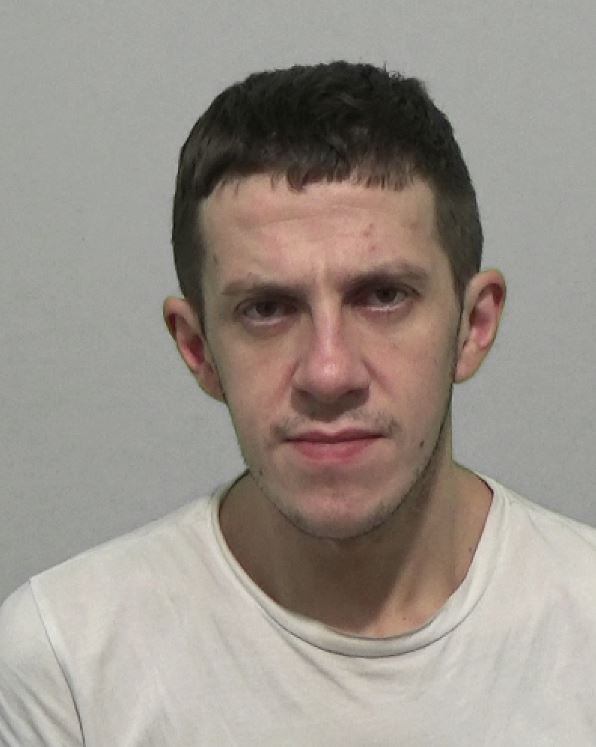 Alan Dunlop, 33, is behind bars after trying to break into a car off Queen Alexandra Road, Sunderland

A light-fingered thief who tried to break into a car hit a dead end as he attempted to talk himself out of trouble.

Alan Dunlop, 33, targeted a Range Rover which was parked in a gated community off Queen Alexandra Road in Sunderland just four days before Christmas.

The serial criminal tried the door handle of the vehicle, but was spotted by the occupant after they saw the security light came on.

The victim then chased Dunlop and detained him, before forcing the offender to reluctantly give up his name.

When arrested by police the brazen bandit, who has caused misery to residents across Sunderland as a result of his frequent and widespread offending, claimed he was merely walking home and had tried to take a short cut.

But his story didn’t quite add up as officers pointed out Dunlop had in fact scaled a 6ft electric gate to enter a private estate that has one entrance and exit point.

Dunlop, of Argyle Square, Sunderland, was found guilty of attempted theft from a motor vehicle and breach of a Criminal Behaviour Order (CBO) when he appeared before magistrates in South Tyneside on January 1.

He was subsequently jailed for 28 weeks.

Detective Constable Michael Wilson, of Northumbria Police, said: “Alan Dunlop has been a drain on police resources for some time due to his cynical crime spree.

“Last year, he served jail-time after committing a string of car-related offences and was also warned that he would face further punishment if he failed to comply with strict conditions set out in his CBO.

“Clearly, Dunlop has not heeded that warning and he now starts 2020 back behind bars, which will hopefully give him time to reflect on his selfish and unacceptable behaviour.

“CBOs are not optional and require offenders to adhere to specific conditions – or face being brought back into the dock and handed more severe sentences, as evident in Dunlop’s case.

“I would like to thank the communities we serve for their ongoing support and reassure residents that we are committed to continue taking offenders such as this off our streets.”

Dunlop was handed a two-year CBO after being convicted of three counts of motor vehicle interference at Sunderland Magistrates’ Court on June 12, 2018.

He is also banned from touching or entering any unattended vehicle without permission from the owner.